Man oh man. Getting your wisdom teeth out means a totally different diet. Alongside of hanging on the couch all day, it takes me an insane amount to get through an entire meal. Surprisingly, the Slim Fast shakes (I got chocolate) are not bad at all. I think if you were trying to embark on a weight loss goal, they are pretty filling for only 190 calories. I don't think you should use it as a meal replacement unless you're eating lots of mini meals, because it's not too energy dense but it's a great filling snack or maybe a light breakfast. This is also taking into account that I didn't move all day, so I didn't need filling food. The best part about wisdom teeth surgery is the ice cream. I get to eat it a lot.

The strange thing is, I have to eat really slowly, which is different for me. I'm like a hoover with my food. It's devoured immediately. This is showing me it's not just okay, but better, to eat slowly. I taste my food!

Today I went with Susie and Dick to a Christmas Craft show that had so many food vendors enticing me with fudge, toffee, caramel corn, chips and dip and everything else you could imagine and I had to turn all of them down! In the last aisle however, a company was selling different hot drinks.. you name it, they had it: hot milk chocolate, hot dark chocolate, mint chocolate truffle, chai tea, cappuccino, pumpkin spice latte, caramel apple cider, etc. They also had "diet" versions of these and they were SO good. They only have 20 calories for an 8 oz cup. I got the mint truffle and dark chocolate. I need to look up the name of this company. It's worth ordering. I also got hired by a caramel/chocolate making company haha. My dream come true!!

I've been eating so much soup and yogurt.. I can't wait for real food! I feel like a grandma with dentures. It's all good though. At least I'll be healed for Thanksgiving...

Posted by Jessie at Saturday, November 14, 2009 No comments:

Good thing this is no profession of mine, or else I would be fired. Life gets in the way. I haven't even really been taking pictures of my food-- or regulating my workouts. I've mostly been doing the elliptical because of my stupid foot. If I had it my way, I would run outside everyday. Especially Virginia in the fall--it's a beautiful time to run. I actually tried to about a week and half ago, but couldn't finish. I had to run-jog-walk. I have to constantly be reminded that I don't have to push myself the way I used to. That, although frustrating, is smart. I know I shouldn't put myself in unnecessary pain, but it's strange to not be working hard anymore.

Last week, people from my J&P class were asking me all about nutrition and recommended that I have a little seminar in addition to the fitness classes. I would love that. It was a nice little preview of what I might be able to do in the future. It's just so fulfilling to be able to educate and help people.

By the way, HALLELUJAH, I think grad school will be a go. I am en route to getting my Masters of Science in Exercise Science in Exercise, Fitness, and Health Promotion. I met someone in this program who didn't seem to really care about it. I think that if one goes into that industry, he might be more excited. It's a service industry. We need to want to help people, or else it's obvious that their best interest may not be our priority. My boss once told me it was our job to make people want to go to the gym. I totally agree.

Anyway, I'd love to give a quick recap over the things I've been eating, but they haven't been too exciting. I'll upload the pictures none-the-less. I only have a few but I'll toss them in. It's unfortunate because last weekend in State College I had three delicious dinners. The first night, Alex and I went out for his birthday dinner. We went to this really outdoorsy woodsy type place called Prospector's with fireplaces, deer heads (yeah, not my thing) and some great barbecue. Alex got his birthday steak and I stuck with a peppercorn steak wrap with fries--yes, I ate them all. They were the thick cut style and we were celebrating! A bunch of people brought him birthday treats--including my former favorite cookie. Jules, if you're reading this, it's the kind from Giant that is really soft with the thick multicolored frosting with sprinkles. Yes, I spilled the sprinkles all over the bed, and yes, it was worth it. The next night, we had Kelly's, which is a restaurant in Boalsburg known for their steak. Let me tell you... although a little pricey, this place was delicious. We split a Dungeness Crab Cakes which were made with sweet bell peppers, butter and fresh vegetables, then pan seared golden brown. Alex asked where the ketchup was but it wasn't missed because it was instead served with a spicy sweet and sour Beurre Blanc. (Aka, a really tasty cream sauce). For my entree, I ordered another appetizer and a big salad. I got the Filet Mignon appetizer, which was only $7.00 and a salad for $5.00 as opposed to a $26.00 entree steak. I didn't need the 10 ounces either. It was so tasty though. My salad was good too...Fresh spinach tossed in a sweet-tart Sherry Shallot Vinaigrette dressing with mushrooms, sweet Bermuda onions, crisp bacon, egg, toasted almonds and parmesan cheese. Saturday night, we had an old reliable Chili's dinner. We split the chips and salsa and then I ordered the Quesadilla Explosion salad and a strawberry mint mojito. Not my favorite drink ever but it was still a nice upgrade from my normal water. Finally, the morning I left, we endured the 30 minute wait at the Waffle Shop (not to be confused with Waffle House) because it is just that good. I got the Western Omelet (egg whites) with fresh fruit and multi grain toast. Alex indulged in a strawberries and whipped cream waffle. I prefer the apple cinnamon waffle but it was still good. We downed like 6 cups of coffee too... SPEAKING OF COFFEE... the Peppermint Mocha is back at Starbuck's and yes, I'm in love. I want to try to create my own version of it but so far not so good. Anyway, that's a brief recap... now I'm sort of back on track.
Philly Cheesesteaks:
The recipe, a secret, passed down from an authentic Philadelphia chef (or, Alex's Dad) to me. I've been perfecting it, and now I'd like to think I've got it down pat. To have the true experience, you absolutely must serve Utz Sour Cream and Onion chips. I rarely eat these, but to legitimize the experience, they are a must. 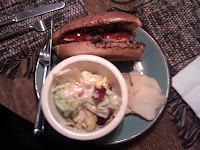 I have a recipe book called "Healthy Home style Cooking," which I got on sale a few years ago and barely ever looked at. Recently, however, I've made three of the recipes. Two were fantastic and one was awful!
The first one we made from the book was a pasta dish with bell peppers, onion, and turkey sausage. There was some Parmesan cheese and olive oil. It was a lot of vegetables, which was good, so it was super filling. On the side, my favorite, asparagus and a salad. 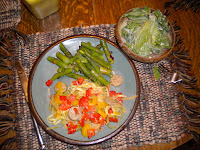 The second recipe we made was also really good. It tasted like General Sao's Chicken but much less caloric. Susie made this but I'm pretty sure there was low sodium soy sauce, sesame oil, chicken, and rice. I must say, the delicata squash on the side was a strange combo, but it still tasted really good. 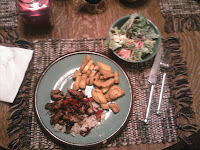 The one failure was a Tex Mex soup. It was actually described as a Mexican Bean soup. I love beans. Black beans, refried beans, pinto beans, whatever. I was expecting a hearty consistency that would be filling. Instead I got a watery flavorless mess, which I had to add globs of sour cream and shredded cheese to in order for it to be tolerable. It didn't go with the green beans, so I wasn't a happy camper. 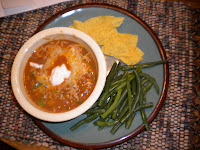 Now, I'm finally "up to date." As exciting as breakfast is for me every day, I skipped the photo ans waited for lunch to start shooting. 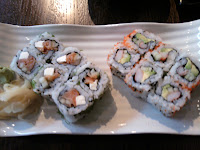 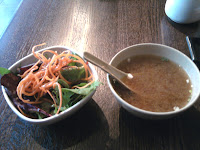 Mel and I went to Asian Bistro. From the outside, it looks like a fast food in-and-out place. The inside, however, is super quaint and very nicely decorated. From the Asian art to the jazz music, the mood was comfortable and laid back. They offered a ton of specials too... including what we both ordered: two sushi rolls, a salad, and a cup of miso soup for $11.00. I didn't think I was that hungry but I cleared the plate. I got a standard boring California Roll but you can't go wrong with that! I also got the Philly Roll... it's like the one kind of sushi that's not good for you but I don't care its fantastic. I tried Mel's Salmon Avocado roll which was also really good. Gotta be honest, I was a little upset we didn't get fortune cookies.

I forgot how nice it is to have great restaurants everywhere here. In State College, it's not as omnipresent. 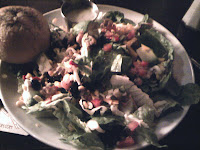 Because both of my two best friends have the same birthday, we went out to celebrate last night. We went to Rock Bottom in Arlington, which is a super crowded happy hour type bar. I was driving but I did nurse one beer most of the night. It was their lightest one but it was well flavored. We had to wait so long for a table but once we had the food I was a happy camper. I ordered a Santa Fe Salad (one of my favorites) with corn, black beans, salsa, cilantro, cheese, tomato, onion and a chipotle ranch. It hit the spot.

Today, I got my wisdom teeth out, so it's Slim Fast Shakes, ice cream, and yogurt for me for the next few days. Be jealous. Ciao!!!
Posted by Jessie at Thursday, November 12, 2009 No comments:

Breakfast: BRUEGGER'S!! Finally... pumpkin coffee and fantastic bagels. I had an onion bagel toasted with garlic herb cream cheese and two big cups of pumpkin coffee (and an apple). We walked around the farmers market in Old Town and I nibbled away at chocolate, bread, and pears. So good. Notice the second picture... mom and dad's famous splits. 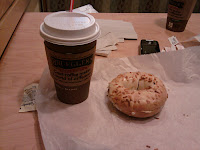 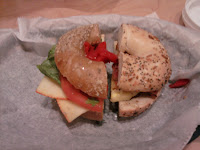 Lunch: It stunk. We had nothing. I made scrambled eggs with cheese and salsa and a handful of almonds. I had a lot of unpictured little snacks Saturday... annoying. 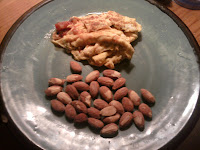 Dinner: Cosi's YUM! I got the TBM (tomato, basil, mozzarella) on a wheat flat bread and potato chips. Real healthy. 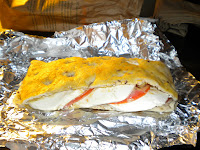 I also went out... Halloween!! Let's see.. I definitely didn't shoot photos all night but I did indeed have a bite of a doughnut at around midnight. Sweet. Now I'm caught up... Hallelujah!! Talk to you soon
Posted by Jessie at Sunday, November 01, 2009 No comments:

Email ThisBlogThis!Share to TwitterShare to FacebookShare to Pinterest
Just going to catch up:
Breakfast: Fiber One, Bananas, 1% Milk 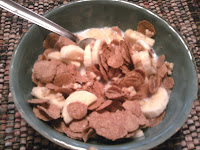 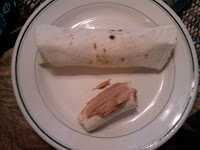 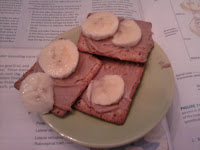 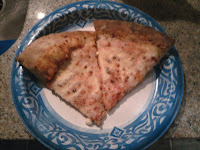