Everyone has had a T.V. dinner before, right?
The plasticky film on top of strangely textured chicken nuggets? Bland creamy sauce over rubbery vegetables? Anyone else salivating?
I didn't think so. As I've grown up, I've realized that cooking does involve more than just tossing ingredients into a pot, stirring and baking. It requires patience, creativity, and a little bit of humility. But, without a doubt, and forgive this lame cliche, but you have to cook with LIKE. I didn't want to say love. It's overused. So, as you're tossing in a sprinkle of salt and a dash of pepper, throw in a little like (or love, you over achiever, you.) to make your dish special. 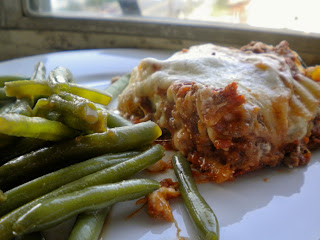 That's exactly what I did. As you all know (well, you avid readers) I have a hungry boyfriend. As you also may know, my hungry boyfriend is only a blossoming chef. He hasn't quite reached his total potential. He's mastered sloppy joe's, BLTs, my signature chicken dish and hard boiled eggs, but I really feel like he's just skimming the surface. None the less, I don't want him to starve, or survive on prepackaged goodies. That being said, I wanted to create him (well, and me) something that would be just as delicious a third and fourth time as it was the first. I wanted to create him a T.V. dinner! Minus all the gross stuff and plus all the good. 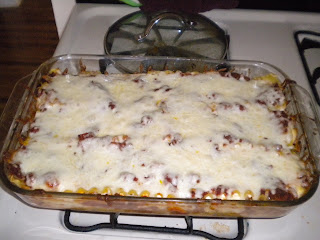 What better than lasagna? It's cut into blocks, freezes well, and always hits the spot. Yes, I know it was 90+ degrees all over the country but that didn't stop me. Oh, and it was awesome. 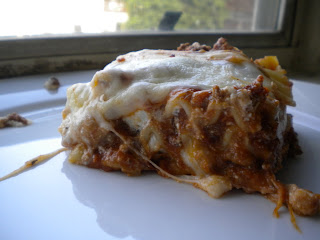 For this recipe, you can save fat and calories and all that good stuff if you use part skim ricotta, whole wheat noodles (not my fave, but you could), lean ground beef/turkey, etc. Or, if you want to go nuts, have regular ricotta and high blood sugar causing white noodles, yum! So, here's the masterpiece. Way better than any Lean Cuisine or Stouffer's... (adapted from AllRecipes and serves 9)
What ya need:
1 pound lean ground beef
1 onion, chopped
2 (6 oz) cans tomato paste
1 (14.5 oz) can crushed tomatoes
2 cups water
1 tbsp dried oregano
2 tsp garlic powder
2 tsp salt
1/4 tsp ground black pepper
1 tbsp white sugar
12 oz ricotta (part skim, if you please)
1/2 cup grated Parmesan
1 egg
9 lasagna noodles
1 pound shredded mozzarella
What ya do:
1. In a large skillet over medium heat, cook beef until brown. Drain. In another skillet over medium heat, cook onion until translucent. Combine beef and onion in a large saucepan with tomato paste, crushed tomatoes, water, oregano, garlic powder, salt, pepper and sugar. Cook over medium heat until mixture comes to a boil. Reduce heat to low and simmer 1 hour.
2. While sauce is simmering, blend ricotta cheese, Parmesan and egg until smooth. Set aside.
3. Bring a large pot of lightly salted water to a boil. Add pasta and cook for 8 to 10 minutes or until al dente; drain.
4. Preheat oven to 350 degrees F (175 degrees C).
5. Spread 1 cup of sauce in the bottom of a 9x13 inch baking dish. Cover sauce with 3 noodles. 6. Cover noodles with one-third of remaining sauce. Top with half the mozzarella. Place another layer of noodles and one of sauce over the mozzarella; top that with the ricotta cheese mixture. Top with remaining 3 noodles and remaining sauce.
7. Bake in preheated oven 30 minutes. Sprinkle remaining mozzarella on top and bake 15 minutes more, until golden and bubbly.
Now, as mentioned earlier, they have NO cooking utensils. I'm talking no pots for boiling water. You should have seen my creativity. I used a pocket knife for a can opener and cooked the sauce in two skillets at one point. I eye balled a lot of the numbers and relied on my taste buds to know right from wrong... success!! Check out the pictures below to see what I was (or was not) working with!
My first attempt without the can opener was both ineffective and unsafe. 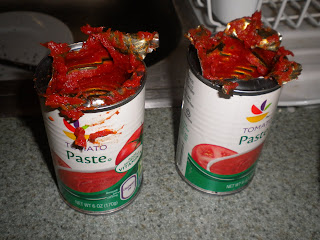 Then I mastered it! Pop Pop would be proud of me! 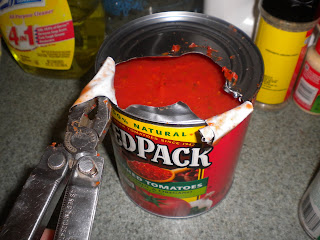 See this cupboard? It's barren. 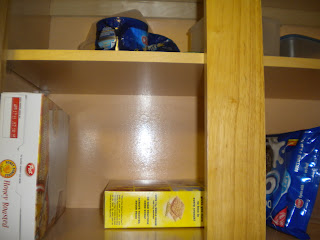 No tablespoons in this drawer...but an egg slicer? 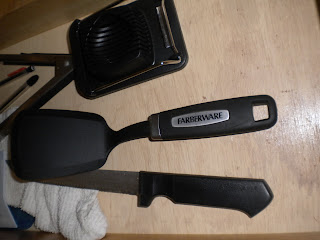 Well, that's all for now folks. I was supposed to be doing homework.. Well, I was multi tasking, at least. Ta Ta!
Posted by Jessie -- The Messie Kitchen at Sunday, June 27, 2010

so when did you post this?...... sounds like a good recipe and would make lasagna and cut out the fat????

Those are the best type of recipe. It just brings a level of comfort when you have it.

I love lasagna and love trying new recipes for it! I'll definitely give this a try!

You are very innovative for making this with no kitchen utensils! Wow!

That is truly a man's kitchen and you are a hero for creating so beautiful a dish in that barren wasteland! Take him to Target's kitchen center and stock him up (on his wallet)!

You are right about liking (or loving) to cook. The more you relax and enjoy, the better it gets. I honestly find the process, the melting of all of the ingredients together slowly, to be mesmerizing. Lasagna looks great! Nice job being creative.

Never anything wrong with a good lasagna!

This looks so good...and cheesy, my favorite! I'm so impressed with what you made from so little! What a boy kitchen :)

Lasagna...such wonderful comfort food. Whenever I've had a hard week, I always want to put a pan into the oven and sit down to a warm and cheesy slice.

Very brave/creative of you to cook in this kitchen! :) Your lasagna looks delicious. It's one of my favorite comfort foods.

Looks good to me, I love meals that you can double and freeze! Funny about your no can opener, I have definitely been in that situation before!

i seriously love that you have just as many kitchen mishaps as i do! it's so great!!!!

I love lasagna! You've triggered off some serious pasta cravings in me... we're definitely having some this week for dinner! :)

hahahha i am laughing so hard at your comment. 12 months is basically like marriage! funny you say that, but i actually call my blog "my child." yep.

i was worried people might think that was BLOOOOOD...glad you see it's just dye :)

I am a big lasagna fan, thanks for sharing your recipe and photos=}