Today is a strange day. I am in Boston in my lunch break and it is sunny and rainy and warm and February. That is strange in it of itself. But stranger yet, is where I am going tonight. This evening, I am flying back to good old Fairfax, Virginia, where I will sleep in my adolescent house for the last three nights ever. 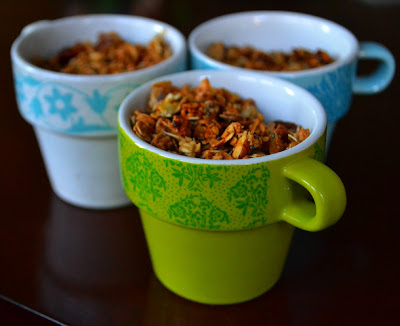 That house, which I loathed when we first moved, was a game changer. In that house, I met some of the best friends someone could ask for. I made plenty of mistakes and plenty of advancements. I grew up from a very insecure girl to a slightly less but still awkward teenager to (what I would like to consider) a pretty squared away young lady. I've spent hours laughing, crying, watching movies with my family and gossiping with friends on my big blue couches. I've spent hours sitting at the kitchen table doing crossword puzzles and waiting for things to finish in the oven. Memories, people, memories.
So it will be a tiny bit bittersweet for me. Happy my parents are both blissfully retired and moving into their dream lives, but sad that the place I called home for so many years will no longer be ours. So here is a little taste of home, one that I can count on when things they are a-changing.
Maple Coconut Granola2.5 cups regular rolled oats
1 cup sliced pecans
1/2 cup shelled sunflower seeds
1/4 cup toasted wheat germ
1/4 cup chia seeds
2 tbsp toasted sesame seeds
1/2 cup maple syrup (or honey combination)
2 tbsp cooking oil
1/2 cup unsweetened flaked coconut
2 tsp sea salt
2 tsp cinnamon sugar combination
1. Preheat oven to 300F. Grease a cookie sheet and set aside. In a large bowl, combine the oats, pecans, sunflower seeds, wheat germ, chia seeds and sesame seeds. In another bowl, combine maple/honey and oil. Stir into oats mixture, making sure entire mixture is saturated.
2. Spread entire mixture evenly in the prepared pan and sprinkle with sea salt and cinnamon/sugar. Bake in oven for 30 minutes and  stir. Add coconut and cook until lightly toasted. Should you choose to add dried fruit, stir it in after you remove granola from oven.
3. Spread on a large piece of foil to cool and store in an airtight container for up to one week.
Posted by Jessie -- The Messie Kitchen at Thursday, February 23, 2012

I know that getting rid of a huge part of your life can be hard! But, the amazing thing is how much food and family recipes can keep those memories alive. This granola sounds perfect!

I can't imagine how you'd feel. My parents live in the same house for 40 years or so. I'll be crushed when things change, but I hope they'll do it soon because he's 83.

Hi, I just wanted to drop by and say hi! I adore your blog. This muesli looks super good. I will make some on the weekend and let you know how I go. Thanks!:-)

For instance, the state presently receives income when folks spend cash on sure issues, corresponding to lottery games or purchasing. This means the state won't receive new income when folks spend much 온라인카지노 less on these issues so they could make sports activities bets. The best casino websites are devoted to accountable gaming, so it’s a time period you'll typically see when gambling on a good on-line casino website in the UK. Responsible gaming refers to how the participant interacts with the location and what the location does to ensure that|to make certain that} guidelines are being followed. Much of the particular accountability lies with the gamers, who should observe specific guidelines to play responsibly.