It's the day of Alex's surgery. 5:30 a.m. meant I had to run up to my car parked about a mile away so I could pick him up and get him to the hospital bright and early. We got things moving, and surprisingly, I passed on the 6:00 a.m. coffee. It was dark and cold and that's probably the mood we were both in. It's never fun to have surgery, and now that I've been on both sides, I think it's just as hard being along for the ride. The hand holder, etc. I got him there and before we had time to sit down they whisked him back alone. I waited for his parents to get there, and they were considered "late" by 6:25. We went back and watched him get ready, shaved, and drugged. Sounds like the life of a hooker. Okay, that was really horrible. He was out like a light real fast and then we just had to wait. Paul and I got coffee (toasted almond for me, regular for him) and breakfast. I got the egg white turkey sausage flat bread. It's pretty good for a "healthy" entree. Although I give it a nice dousing in ketchup. Margie asked me why my eggs were green... so that gives you an idea of what it looks like. IT WAS BECAUSE OF CHIVES! Don't get me wrong, it wasn't that horrible looking. I think it tastes good, and that's what matters 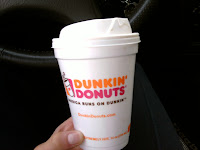 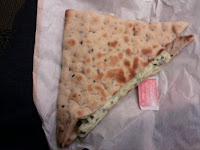 We headed back to the hospital and waited and waited. It's funny how stoic the nurses and doctors can be. Every time someone came out my heart stopped because they looked so stiff as if they were carrying bad news. Then, in complete monotone "He's doing great. Everything is going smooth." Thanks for the enthusiasm. We agreed it didn't matter how, but what they said, so I got over the monotone and was just thankful the procedure was going alright. The combination of a torn ACL, two torn meniscus's (menisci?) and a shattered bone called for 3.5 hours of surgery and 1.5 hours of discharge before he woke up. Instead of hanging around to wait the whole time, we ate lunch without him. 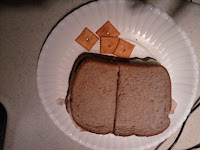 Doesn't this look super appetizing? Yeah, my mood was bland, and so was my lunch. I ate a bunch more cheez-its than I let on. All three of us had major munchies. Margie went through cheez-its, a kit kat, orange juice, and chocolate chips before we left again. Paul snacked on the same, plus a banana. Nervous eating much? Finally, surgery was complete and Alex was ready to go which meant I had to drive back home to Virginia. 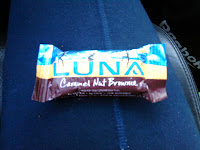 I set off with almonds and another pumpkin coffee. It's getting absurd how much I love it. I was starving half way home so I downed a mini Luna bar and nature valley peanut bars. I think I was a little stressed out, no? Expecting a dinner on the meal was so naive of me. I helped Susie with the salad and we had an interesting mix of spaghetti with sausage and corn. Strange but alright. I munched on almonds and chocolate chips later. 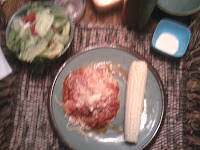 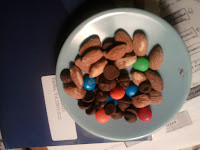 Finally, caught up with my blog. Back to the grind tomorrow. Ciao