In an attempt to catch up again, I'm just going to list my meals. With a few side comments, maybe. Breakfast Saturday was Dunkin' Donuts. I went with the veggie egg white flat bread. It is better than the turkey sausage one, I think. I skipped the a.m. coffee because I knew I'd want some later. I snagged an apple to feel like I was being healthy. Plus, all this "take-out" food makes my stomach hurt. 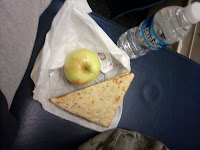 We finally learned how to make one big trip, so right after Alex's rehab, we went to his Aunt's house to pick up stuff, go to the grocery store for lunch food, and then got coffee. So efficient. Lunch was half a turkey and ham sandwhich with american cheese, miracle whip, black pepper, and mustard. 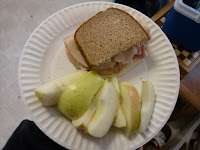 Well, even in the great attempt to shack up and stay in, we both were craving soft pretzels by 3:00, so I braced the drunkies out for the football game throwing snowballs and went out. We also decided to make grilled cheese and tomato soup for dinner... and it's probably a sin to have grilled cheese on wheat bread, so we needed back up. I bought (and don't judge me) energy drinks. I felt like such a bro... "uhh yeah, gimme some white bread, a monster, and a rockstar." Real cool. 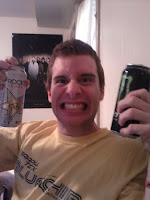 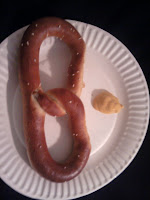 Haha... so that was my snack. Here is dinner: it was scrumptious and hit the spot. 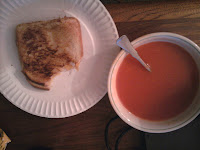 And of course... sweets and treats before bed time. I could get used to this...
Posted by Jessie at Sunday, October 18, 2009