Today was just one of those days. The ones you try to sleep through your alarm and pretend it isn't going off. I tried. I got up and the first thing that happened was I forgot my proxy card to get into the parking garage. No big deal; I can park elsewhere. None of the "regulars" showed up at my class this morning. I must be sucking. Either that or they finally came to their senses about waking up early. I had three women who did show, two of which left early leaving me one-on-one. I loved the one-on-one. The woman could easily verbalize if she couldn't do something or didn't like an exercise. It made for a much better connection. Obviously, this won't be a norm but it was nice. So then I'm out of class and I change back into my uniform. I wore my black yoga pants and when I was trying to get them over my shoe I got caught and fell on the floor. I laughed it off. I walked over to put my bag in a locker and hit my head on a coat rack with no coats. I saw the direction things were going. I threw my gum into the trash can, missed. I opened my gym bag, shampoo had spilled everywhere. Forgot underwear, do that a lot. Forgot one clean sock. So it was a good morning. Class was cancelled! That was phenomenal. I got my work in finished by 10:00. That makes the rest of the day so nice. Oh right, same old same old early morning breakfast: oatmeal, almonds, apple. No coffee til way later! I was proud of myself. 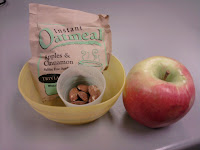 Consequently, I also got great news today: I'm getting my wisdom teeth out! That's not the best part... The best part is that I'm getting them out on my two best friends birthdays!! What luck. That's gonna make for an interesting few days of food entries. Anyway, back to today. Of course, just like yesterday, still no lunch meat. I had to get creative. Not knowing I was making dinner, I made a mini pizza-type thing on my Oatnut bread with a banana. Nothing special but it tasted good, and hit the spot. After a bunch of errands I had my usual caffeine headache and got my Starbucks with half milk/half my creamer. Delish. 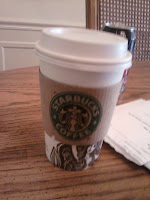 I had two snacks today. One was a bowl of Puffin's cereal (don't be misled by the mini-wheats, I was just finishing the box). Sometimes cereal is really all I crave. I used to eat big bowls of it for dinner all the time. 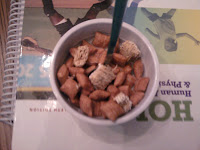 My other snack was as I was making dinner. I had some leftover mozzarella and I put it on those butterfly crackers everyone knows so well. I added some of the pizza sauce and a thin slice of chicken... yes, I went to the grocery store, again. 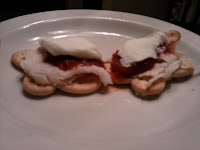 Dinner was spectacular. I did everything tonight. I made meatballs subs and broccoli with a salad (avocado, almonds, heirloom tomatoes, cukes, and onion...oh and blue cheese dressing). My subs were good considering I just threw it all together. I was impressed. Melted fresh mozzarella... ummm.... I don't think it gets much better. 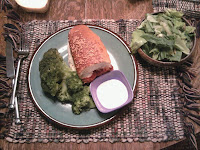 An apple and some almonds for "dessert." No sweets stinks, but strangely enough, if all day long I'm under the impression I won't have sweets, I don't crave them so much. Looks like I may win this bet after all. Maybe I should up the terms...
Posted by Jessie at Monday, October 26, 2009