Okay, so I claim to be around mature palettes; I like people who enjoy trying food. Whether it's a new ingredient, cooking style, or just completely crazy, I enjoy someone who enjoys being a foodie. This morning however all it took was two little girls to show me enjoying food is not about a mature eater with expensive and exotic taste.This morning, I babysat a 2 year old and a 5 year old and one of the funniest experiences was breakfast. 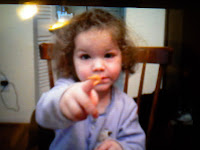 Although this next statement is unfortunately changing because of stress in the media...for the most part, kids have no care about calories. Sugar isn't the enemy, it's that tasty crystal like substance that makes mom's cookies their favorite. Cheese isn't to be used sparingly; it's the oozy gooey fun that comes out of the side of their grilled cheese. Food isn't the enemy; it's an after school snack, a bowl happiness or a cup of bubbles. Children are not obsessed with the dynamic of eating that almost everyone in this country spends hours analyzing (myself included!) You'll never see a child struggling over ordering the bacon cheeseburger versus the grilled chicken salad. You won't see a child finish the whole plate just because it's there. I love watching kids eat because it is not just about the food-- it's an EXPERIENCE. 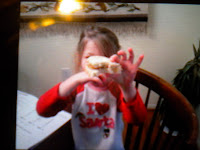 I'll be the first to tell you I love food-- and everything about it. What I love most however, is the feeling I get when I am actually eating. Kids are different. They take in the texture of the food by holding it. They look at it, smell it, take little bites and chew slowly. The girls both had one chocolate chip cookie each which took about 15 minutes to eat. In fact, the littler one didn't even finish because eventually she decided she had better things to do than finish her cookie just because it was there. A peanutbutter sandwich became quite a mess but it was enjoyed thoroughly... as you could tell from sticky hands and lips. The older one created a (well... mess) solution to breakfast boredom. Because there was no milk, she made this hilarious concoction of plain cheerios, honey and peanutbutter on white bread. A sign of success "Dis taystes moh like dessurt dan bwekfast." 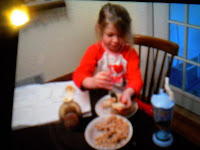 And though most would kill for the chance to enjoy dessert for breakfast, she stopped halfway through because she was done. The littler one wanted peanutbutter on bread-- hold the bread. "I juss gonna eat da peanutbutter can I haff mowe?" And it took about 20 minutes for her to observe every little pea-sized amount of peanut butter on her finger before it went into her mouth followed by giggles when I showed her the smear on her face. When she was done, she was done. There was no emotional cue to eat more-- how different from adults. I'm not saying to eat what a child eats, but maybe try to eat like a child does. 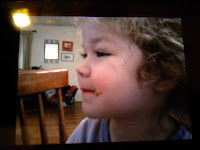 Now, I wish I could tell you I implemented my own advice today but it was just one of those days. Nothing seemed to fill me up!! I think I worked out too hard this week. So, I took the day off-- making me feel guilty for all I ate but oh well! Breakfast was early-- and no picture: a peanutbutter and fluff sandwich. I knew today was going to be rough when I come downstairs to see the other half of my banana sliced up in my MOM'S cereal! So, I had to make due without it.

After a few hours with the little ones, I was absolutely starving! I couldn't even wait for lunch so I had a big mug full of fiber one and special K with milk. This was supposed to be my pre workout snack but one problem, I forgot to work out! 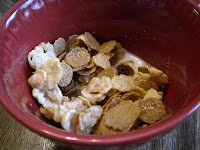 I went out to lunch with a friend at Panera. Though my choices were OK nutritionally... this is a bigger lunch than I'm used to and I ate it all! The problem with places like Panera is that even the "healthy choices" are stocked full of sodium, which causes you to eat more, and crave more! I ended up getting the French Onion soup with a half BBQ chicken chopped salad with corn, black beans, tomato and a ranch dressing. I didn't use most of the dressing and took of about 1/2 of the tortilla strips. I also had the wheat side baguette (which I tried avoiding but the cashier convinced me, darn!) Oh well.. it was a good lunch followed by a better cup of Dunkin Coffee... mmm... simple pleasures. 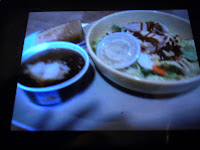 So, much to my dismay, I was uninvited to dinner with my parents and because it was just one of those days, I wasn't surprised. I had big plans to just heat up some of the pasta we had earlier in the week and roast some cauliflower with it. I ended up eating more than 1/2 of the entire head of the veggie! I made a sub with... drumroll please... the makings of a BLT. But, no mayo! So, yeah... big surprise. I munched a lot before dinner on the pasta I was going to make so now I'm stuffed... but still wanting some ice cream... tee hee... 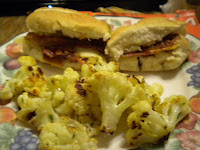