Okay, these are a bit better. For those of you who blog, there is nothing worse than posting food (or whatever) that you're not excited about (i.e., my last post, umm NOT exciting to see my pear/orange/yogurt). But, as a rebuttle, I have all dinners from this week and all three have been delicious. So, take that. And read on.

Dinner Monday night. I don't care what you say... you can't go wrong with tacos. Ground beef, avocado, onion, tomato, cheese, sour cream, corn tortillas, perfection. I had two... and a half... yum. 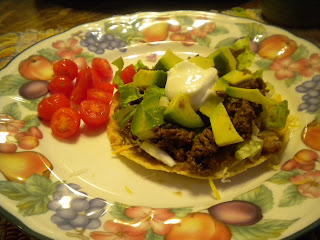 This was dinner Tuesday night... Garlicky Peppers & Shrimp Linguine. I love it because it's so easy to make but it tastes so good. It's absolutely necessary to use the spinach linguine here. Regular doesn't work because it just needs the extra flavor. Try it though. It's so easy!! I made some baby broccoli on the side. e 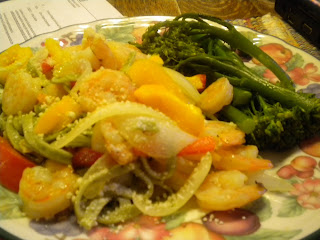 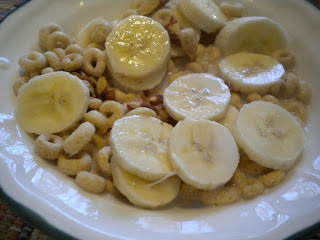 This was lunch today. We were out of avocado, bummer. I made a BLT minus the T, plus an LFM for low fat mayo. So I had a B,L,LFM. Decent. Actually, better than decent. Bacon is so good, there I said it. I also had this Boston Creme Pie yogurt. Mmm... so good. Still can't top cherry cobbler and key lime pie... or blueberry pie. Can you tell I love these? The apple I saved for an afternoon snack. My initial plan was apple with PB... but then my boss brought these PB filled pretzels he wanted me to try. If someone had messed with my eating patterns two years ago this time, I would have had a fit. It's sad to look back and think I would have turned down three M&Ms unless I had pre-planned them into my day. Today, I realized, I'm no longer anywhere like that place! It's great. So I had the pretzels.. and planned on maybe eating the apple sans PB later. Wrong-o. My body was hungry, and so I fed it. Such a novel idea, right? 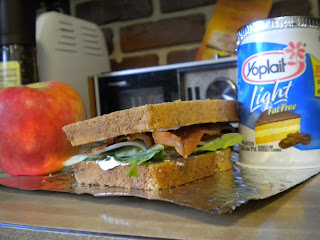 This recipe was found in the Washington Post. I didn't make it... Susie did. I don't think I would look at this recipe surrounded by all the DELICIOUS looking food in the post and pick it, but she did. So, I ate it. Not bad at all. It's a Spicy Black Bean and Potato Stew. Healthy, filling, and comes with cornbread. We had a salad on the side...not too exciting and the dressing was so bland, I just ate it without. Still.. for a vegetarian meal, I'm feeling a bit stick-to-your-ribs, so that's a good sign! 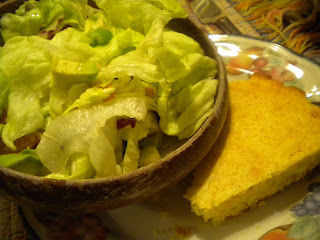 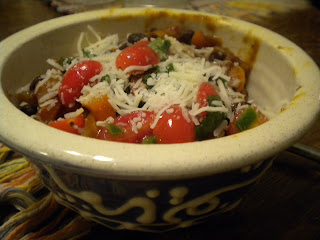