Today was a day of delicious, stick to your ribs, eat your face off food. To be honest, I could have been way worse, so I'm okay with my choices.

After a night out with the girls and just a few hours of sleep, I got up to snag a trip to Old Town, Alexandria with the parents where we hit up one of my favorite breakfast spots-- Bruegger's Bagels. It was a toss up between cream cheese and egg sandwich and I definitely picked correctly: ham, egg white and cheese on a toasted garlic bagel... SO good. But more importantly, have I raved about Bruegger's coffee before? I think so. French Toast (not to be confused with french roast) coffee... so hot, so flavorful, so perfect for a cold February morning. Also, after a stop to the farmer's market, we had fresh honey bells, so that was breakfast. 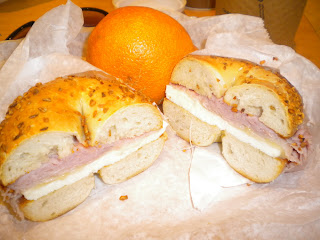 Lunch, on the other hand, was decadent. Georgetown Cupcake, my little heaven called my name for the monthly trip. This, obviously, not the healthiest choice. Easily the tastiest. I split with Amie and we picked the red velvet (had to) and the chocolate with cream cheese frosting. To. Die. For. Mmm... When I got home, I needed some vegetables so I roasted asparagus and bell peppers. 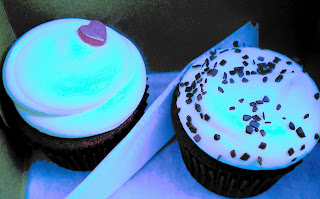 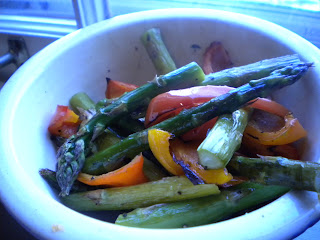 It was a nice fake out. I had some crackers and cheese before dinner because obviously, the cupcakes didn't do the trick totally. On a side note... the top of the cupcake is easily the best part. The frosting they have there is absolutely absurd. Creamy, sweet, but not too sweet that you don't want to just eat it straight out of a bowl. The one thing that I prefer about other cupcakes is that these look mass produced. I mean, they are, but I like a little rustic touch. So, I'm open to new options in the area. Or I could make my own...since joining FoodBuzz I've seen some amazingly beautiful recipes that are mouthwatering to look at, let alone smell, taste, and experience fully. Anyway, on to dinner. I wanted to make something I've never attempted before... Fettuccine alla Carbonara. So good! But, I would do some things differently... Here is the recipe.

Fettuccine alla Carbonara:
6 oz fettucine pasta
6 slices bacon
1/4 cup parsley
1 cup half and half (you could use heavy cream to enrich this dish, milk to thin it out)
1/2 cup Parmesan
1 egg beaten
2 tbsp butter

Cook bacon in a pan. Drain.
Meanwhile, cook pasta according to box directions. Drain and keep warm.
In a medium sauce pot, combine half and half, butter, and beaten egg. Cook over medium heat until mixture sticks to spoon, about 6 minutes. Don't boil. Immediately after taken off heat, add to drained pasta. Add in the cooked bacon, parsley, Parmesan and salt to taste. Serve immediately. 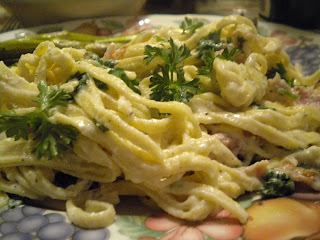 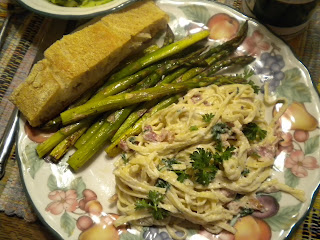 I might add some more parsley, Parmesan, and bacon. So basically... make it worse for you! Tasty recipe though. I'll try it again, for sure. We had some freshly baked Ciabatta from the farmer's market and MORE asparagus. I whipped up a salad too... with toasted almonds, french onions, regular onions, cucumber, tomato, feta and salt and pepper. Deelish. Okay, who has homework on a Saturday? This girl. Adieu!