We went from the sun and breeze in New Orleans to the bitter cold blizzard in Virginia. Unreal! Like I said, to be honest, not all the food we had was creole and delicious. We tried to get as much authentic cuisine as much as possible but day three of red rice and beans with gumbo/jambalaya was enough. I'll try to give you a small breakdown but apologize my pictures are out of order. The best meal we had (up until the last night) was in the airport! Isn't that pathetic? Ha. Julia and I both got Bourbon chicken with salad and pesto pasta. For airport food, this was surprisingly really tasty. It was funny though... Julia packed her own lunch and it was almost exactly like the lunches I eat every day. She had the arnold sandwich thins with greek yogurt and a pair. Then later, when I busted out a Hershey Dark Chocolate Bliss square, she busted out a Dove Chocolate herself. It's funny to think of how we both have the same habits now. You should have seen the way we ate as teenagers. Rice a roni, cheetos, mini cupcakes. Those were probably the three main staples of our diets. We've come a long way, Jules! Anyway... here is suome of the stuff I actually got pictures of. 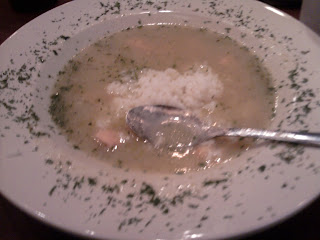 This gumbo was unfortunately little more than chicken broth with rice, chicken, shrimp and sausage. It lacked spices and flavor and the big build up was just a major let down. So sad. I think I'm going to try to make some on my own. 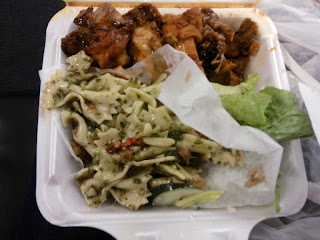 This is the five star airport meal. Delicious. Who would have thought this would be the best food? We did get it in Houston though. Everything is bigger (and better?) in Texas. I know from Daus though... Houston ain't where it's at!! 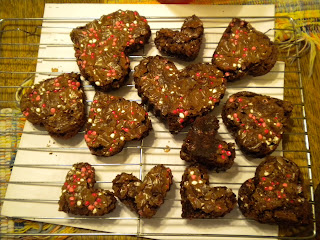 These are just some delicious brownies I made when I got home and I'm posting because they are cute. I only ate the pieces that couldn't fit in the cut outs. 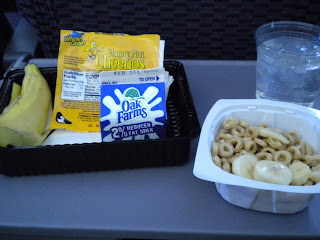 Tasty airplane breakfast? Actually... after all the indulging we did this weekend, I was more than happy to see this plate. 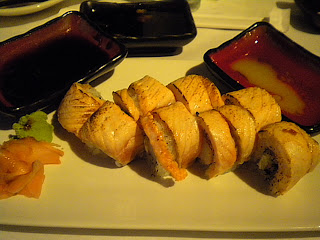 This was by far the best thing we ate all weekend. I don't always trust raw sushi but this smoked salmon surrounded an inside of cucumber, crab, and cream cheese. Ohh it was so good!! 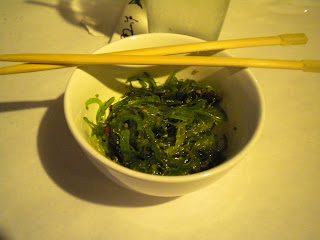 This wakame salad, which is made of seaweed and sesame seeds, was actually really tasty. I would have never ordered it but now I will always look for it on Japanese menus! It's really light but has a good flavor. 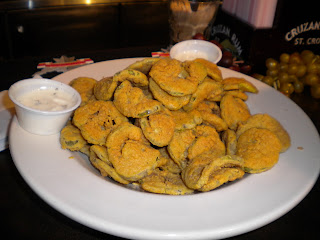 Amy convinced (not tricky) to order fried pickles. These things were awesome. Want to make something better? Fry it? Want to make it way worse for you? Fry it. 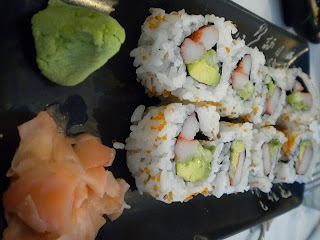 This was a California roll from the same restaurant the other sushi was from. This wasn't as extravagant but I wasn't feeling as adventurous for lunch. Sushi is a perfect light lunch, as long as you don't drown it in soy sauce... like I may/may not have! 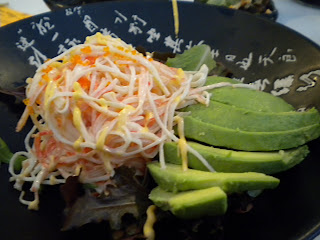 This crab and avocado platter was described as a salad. I thought lettuce salad. They meant full of mayonnaise salad. Oops. Still tasty, but really the avocado was way more appetizing than the crab. 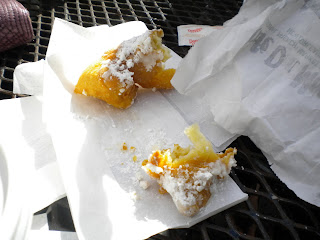 Last but not least, this was a beignet from the famous Cafe du Monde. Delicious. I don't really eat things like this often and I don't think I'd always eat it but with the cafe au lait I ordered, it was a slightly sweet delight.

Anyway, things will become very boring in the food world for me as I try to get back on track. There's nothing like a good splurge but I feel way out of whack. It's hard to stay good on vaca, but I suppose we could have been worse. Time to get back to shoveling! Bye bye
Posted by Jessie at Tuesday, February 09, 2010