I didn't think it was possible to be so tired, but after averaging about three hours of sleep per night from Thursday to Tuesday, all I want to do is sleep! And eat. Since I got home, my eating has changed dramatically. No fried food, no alcohol, nothing that hasn't been homemade. To my body, this is culture shock. After almost a week of solely processed food, I crave salt. It's awful! It takes a few days to get back to normal. Your body can be trained not to crave really salty and sweet foods, but it can be broken just as easily. Since I've been home, I've tried to be good about limiting my salt intake but I can't stop thinking about it! It's horrible. Anyway, I haven't taken too many pictures lately because I haven't eaten anything too extravagant. Dinner on night one was chili. Breakfast on day two was Organic Flax Waffles (generic because the grocery stores are out of everything!) with Vanilla Greek Yogurt, a whole banana and sugar free syrup. 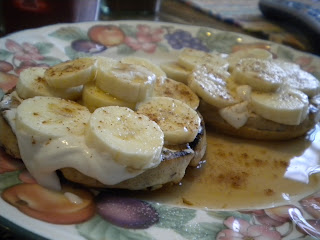 This breakfast hit the spot in a major way. To have control over my choices was a great feeling. This sounds a little crazy but it gives me much comfort to know exactly what I'm eating. I didn't get a picture of lunch but I had another boca with two clementines. We had the best oranges in New Orleans! It was unreal. I guess it's because nothing is dying in the freezing winter down there.

My snack yesterday was black beans and cheese. Random, I know. Not even worth taking a picture of!!! 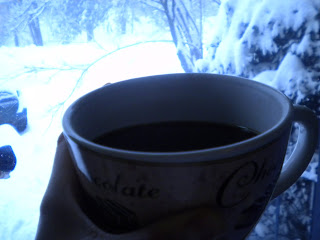 Nothing like a hot cup of coffee to warm up after shoveling snow. My car was the cleanest in the neighborhood. This was my excuse not to work out yesterday! That, and the fact my knees still hurt from long hours full of dancing and walking on vacation.

Dinner was one of my favorites. Per request of one of my friends, I'll include the recipe. This is so simple, but it tastes decadent. 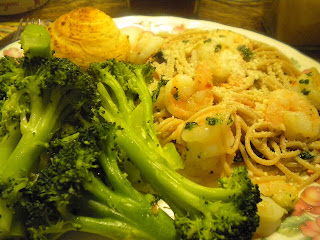 In a large skillet over medium heat, melt the butter with the oil. (We use both because it combines the flavor of butter with the high burning temperature of olive oil). Add shrimp, parsley, salt and red pepper. Cook until shrimp turn pink, about 3 minutes, while stirring frequently. Meanwhile, cook the pasta in a separate pot, and drain. Toss the pasta and sauce together. This is supposed to be a 4 serving recipe, but we split it between 3. I would maybe cut it down to 2 Tbsp both butter and olive oil, but have yet to try that.

We served it along side broccoli and Pilsbury crescent rolls. Those are never served in my house! But, they were delightful.

I finally got my ice cream kick... how I missed it. But now, we're out. Back to boring dark chocolate! ...or hot chocolate... hmm..