Sorry for all the delays, I have good excuses! I've been in Philly with Alex on a whirlwind experience which I'll fill you in on because it dramatically changes what I eat and how I eat and I think it's pretty interesting. But before that, I have to tell you about the pre-Philly stuff. 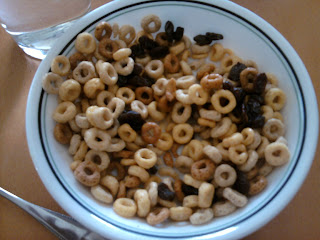 These are just two breakfasts-- one is mine, the others is Alex's... take a guess! 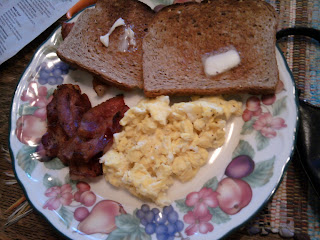 Friday was another training session with a client and my own work out. I had to cancel meetings because life got in the way and I had a lot to do before my little visitor arrived. I don't even remember what I ate Friday until dinner, but I do remember going to the dinner of the soccer I coach. High school girls. No concept of what is good for them and if there is, they throw it to the wind in favor or flavor. Plates full of brownies, cupcakes and cookies were devoured in a matter of minutes and it's so nice to see young girls eating normally, without obsessing on every calorie, like I probably do! Well, not so much anymore... but I have in the past. It's so funny to be around young girls again... all they do is gab about boys, gossip, and whisper. I'm glad that part of my life is over, not because I didn't love high school (because I did) but because I can see now that parents are right, and so many of those seemingly important things matter not at all anymore. And all of those girls who seemed so cool, and guys who seemed so mature were really something that no one truly missed out on. So I'm glad I'll be there for them as someone who survived high school. 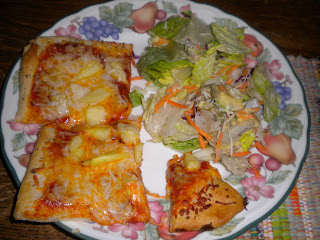 Okay back to food-- that night I made pizza for the two of us and it's so simple and so good that I think everyone should try it. I've mentioned it before but all you need is Pillsbury pizza crust dough, pizza sauce and any cheese/toppings you want. It always turns out yummy. 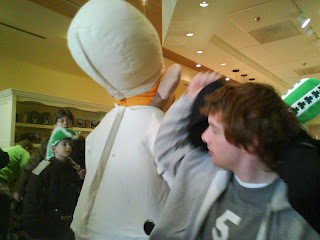 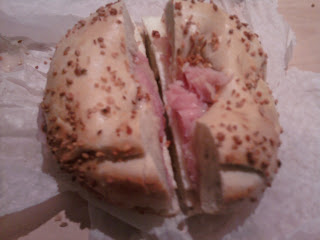 Saturday morning, after a tumultuous trip up the beltway, we met my parents at Bruegger's and I got the Egg White Ham and Cheese breakfast sandwich on an onion bagel... yum!! Here's Alex and Bruegger the Bagel Mouse. Looks like he is beating him? 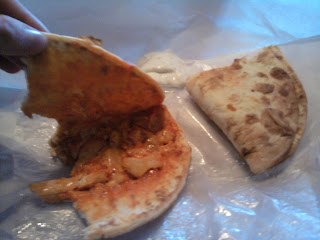 This is a crappy old wrap from Wawa. I had high hopes for the buffalo chicken flatbread.Let this be the proof it's not all that exciting. In fact, it is extremely lack luster. But, we had to grab lunch after a long day at USTC, a huge soccer complex in Philly... more about that to come...

The reason we went to USTC is because I had a brief experience with the women's professional soccer team, the Philadelphia Independence. I spent just one day with the team over preseason, but like I've been complaining about my ankle, it failed me again... just like last year and the Freedom. This year however, I was much more confident, and the coaches were really supportive and knew I hadn't played in a year. 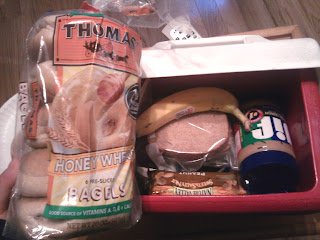 Even though it was only a day, I thought it was funny to see how my eating changed: bagel & cream cheese for breakfast, banana for a snack, bagel and peanut butter for lunch, a yogurt and a granola bar after a double header of two hour practices. I was pooped. It was awesome training but exhausting...especially considering I've basically just done the elliptical for a year... um, big difference. So that night...we got milkshakes from Nifty Fifties because I was so upset my foot failed again. That's after a yummy spaghetti meatball dinner from my Alex's mama. 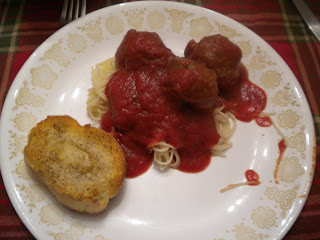 So, here I am, a washed out pro (yeah, okay, I'm milking the title... because it's not totally true, but who cares!) The owner and general manager both invited me to come back if I ever change my mind. Until then, it's more personal training, group exercise, high school coaching, club coaching and now being on the support staff for L&T Fitness (hopefully!) So, I'm a busy gal. 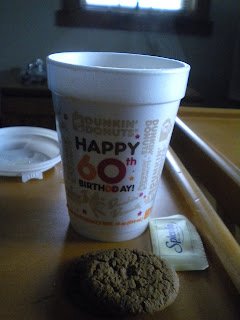 So, more pics. We drink a lot of coffee--especially because Alex has endless giftcards. Here is a coconut with ginger snaps... so hit the spot! 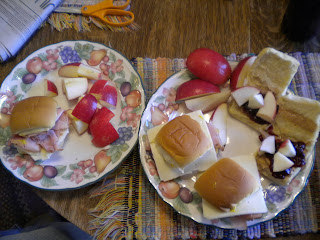 Can you tell who's lunch is whose? 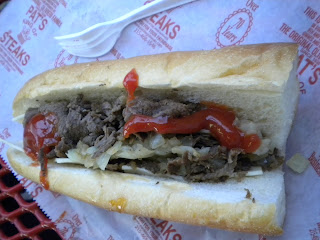 Mmm... Pat's King of Steaks Cheesesteaks: American/wit (aka, American cheese with onions).Don't mess it up. Don't say please. Don't dawdle. Get in, get out, move on. I love this place, but it was definitely intimidating the first time. Now, I've got it down...but I've heard now I can never try Geno's because I started at Pat's. One nibble couldn't hurt.I need to settle this great debate! 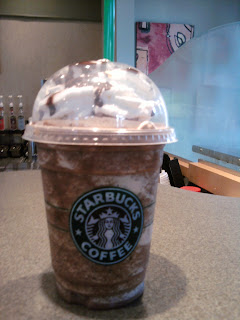 We got treats from Starbucks. I got the Java Chip Light Frappuccino with whip and drizzle. May seem weird but the light version saves you about 100 calories, and with the whip and drizzle, it tastes just as good. It's a nice little tip! 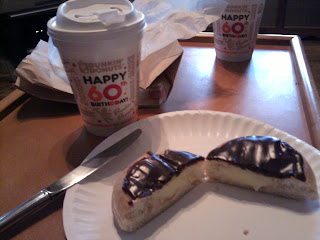 We also split a donut one day (I swear all these sweet goodies were spread over like  a week and a half!) Not just any donut, but Boston Creme. I only had a bite or two though. It wasn't worth all the calories (280 in this one). Okay, so I have my moments of diet blunder, too. So be it. I'd rather enjoy my life/food. 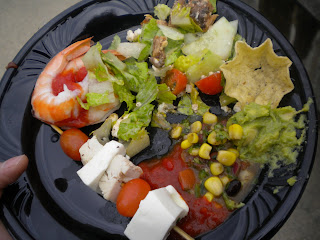 This is a picture of the UNC tailgate food after the lax game. Loved the guacamole, shrimp and the little mozzarella skewers! 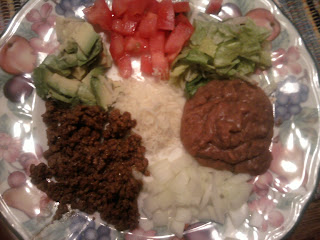 One night back in VA we had tacos and I wanted to give you a more vivid spread of what goes in...ground beef, onion, cheese, refried beans, lettuce, tomato, avocado, sour cream.

That's all I can bear to post tonight... Hope you feel a little caught up!