No, it's not the sound of a nearby goat. It's actually the way the townies pronounce their humble abode, Baahabba, Maine.
Bar Harbor is the quintessential New England town, in my humble opinion. I've been going there since I was a wee-tot, and I must admit, as a child, I hated it. Please, don't be offended! I was uncultured and ADD. I hated nature and I didn't like seafood. Read: Bar Harbor was not the place for me!
Things have changed.
So, continuing from yesterday, the three of us (Dad, sister Vanessa and I, if you've missed out) are putzing along the highways of Maine. Saying goodbye to Boothbay was only easy because I knew what awaited us.
Now, typically I'm a go-go-goer. I like to get where I'm headed and do what is planned and then move on. Have you ever met my father? Don't be in a rush if you're on a trip with him. It will get you nowhere. I've learned, in my wise and matoor age of 22, that I should slow down every once in a while... and good thing I did.
We had the option of speeding down the highway or taking some off-the-beaten-path-roads through some of the tinier Maine towns. Hello, great idea! On the side of the road, in the middle of no where and inbetween, lies the Maine State Prison Showroom (yes you read that correctly). 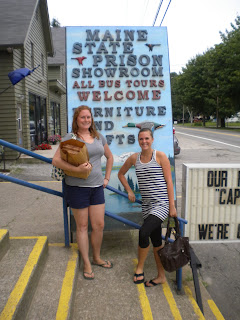 Yes, you guessed it. Everything in this easily missable store was hand crafted by not little old ladies, not charming old grandpas, but inmates. Hilarious. Tattooed and rough n' tumble, these men must have delicate hands. They sure crafted some nice things. So nice, in fact, that I bought my first wooden cutting board! And I love it so. Seriously, this place was great. And who doesn't want to support their local prison?!! 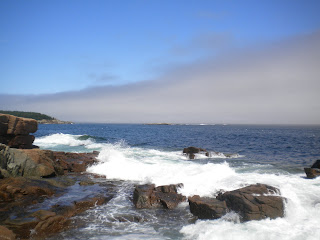 Moving right along... some hours and one coffee break later, I start to recognize where I am and I get a text from a friend saying "say hi to Obama for me!" What? 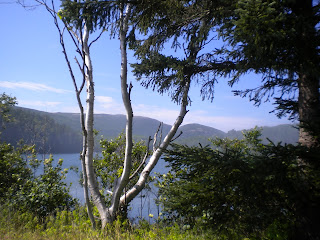 Obama? In Maine? Of all places the president could pick on a random weekend in July and he follows me and my DC Metropolitan family to Bar Harbor, Maine? What are the odds. Now, I did notice that all the local businesses had "WELCOME OBAMA FAMILY" signs, but there was none welcoming the Davises. I thought that was rude, but no one asked for my opinion. 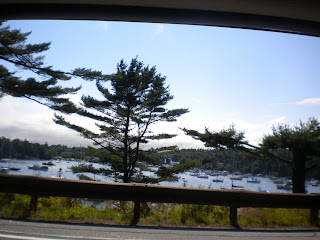 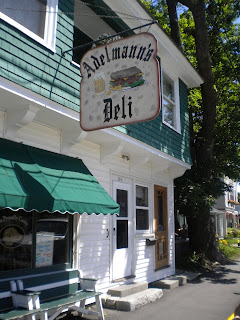 Lunch was at this recommended little corner store called Adelmann's Deli. We were rushing to get to Acadia National Park so we took our sammies to go and headed up the mountain. I got a turkey reuban and loved every crispy bite of it. Oh how I love melty swiss and saurkraut. Must be my German roots kicking in. Vanessa got chicken salad. How American, gross! It was pretty good though. So, we headed toward the big green mountains and away from major civilization. 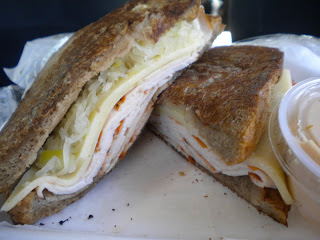 If you've never been to Acadia, it's a beautiful park with crashing waters, huge trees, magnificant views and even a beach. Not white sand, but a beach none-the-less. 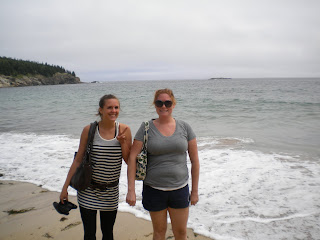 We took touristy pictures and enjoyed the scenery. By the way, I was not dressed for the outdoors. I look like a city girl prima donna. And that's what I am baby! Just kidding. But seriously, do I not look out of place? 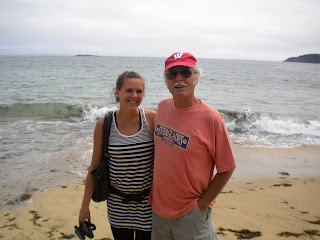 When we finally got to the top of the mountain, the view was breathtaking...ly horrible. It was so foggy we couldn't see more than our immediate surroundings! Bummer. But it was windy and cold and I love windy and cold during the summer, so I was happy. 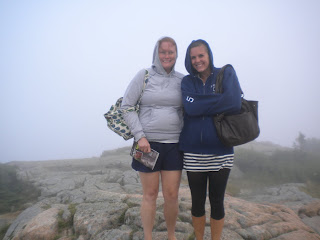 We set back into town and avoided the Obama crowd at a nearby restaurant. Silly Bar Harborians, so desparate to see fame... how country bumpkin of them. 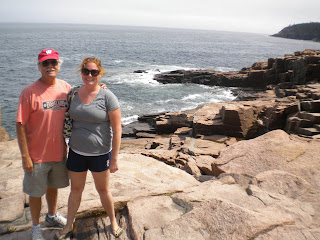 So after we fought the crowds and got a window table at West Street Cafe so that I could stalk the Obamas from a distance (oops, I blew my cover), we had another fantastic sea food dinner. 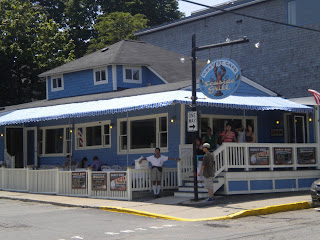 And sorry to disappoint, folks, but we got basically the exact same thing as the night before. 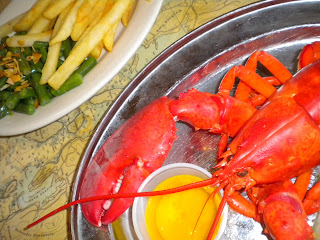 I with the lobster dinner, green beans and french fries, Dad with the sea food platter and clam chowdah, and Vanessa (the only one who branched out) with crab cakes and a salad. 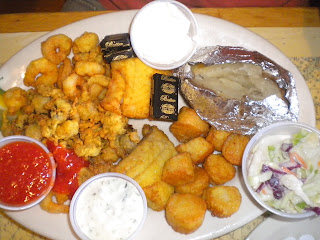 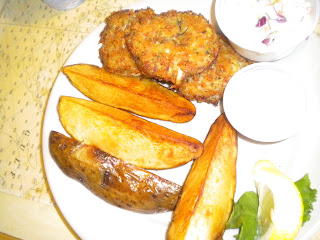 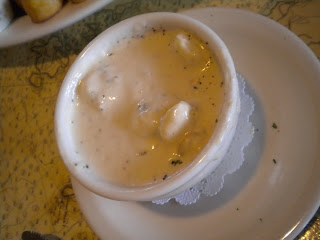 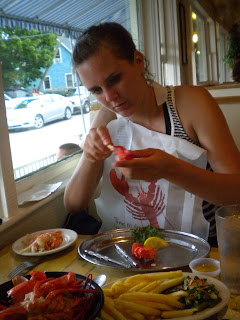 I must say, I preferred the Boothbay lobster, but it's probably because Obama stole all the best lobster for his family. 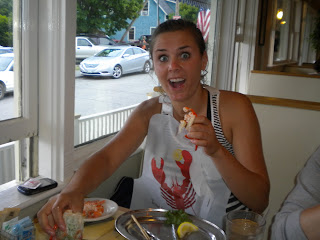 When our waitress asked if we wanted dessert I lied and said I was too full because I was on a mission: find where Mr. Pres and company got sweet ice creamy treats. And guess what? Mission accomplished. 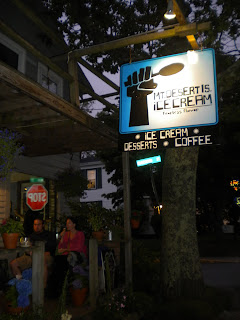 Yes, Obama likes his ice cream too. And although I am a fan of him, I am not a fan of his ice cream choice. Coconut?! Get real. We followed our noses (or ) to Mt. Desert Island Ice Cream, which featured a plethora of non-conventional flavors such as chocolate and vanilla grapefruit and cilantro (HEY CILANTROPIST!!) and chocolate wasabi. I really wanted the caramel macchiato flavor but since the scooper had just taken it out, I didn't get any. 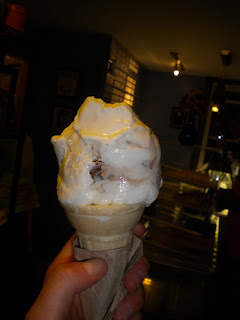 I threw myself a pity party and went for a chocolate and pecan version. To be honest, it may be good enough for the president, but hey, I have higher standards. I prefer CJ's Big Dipper, just down the road. There, I said it. I'm sorry.
We then hit the hay and got ready for the big day. Drumroll please.... a whale and puffin sighting tour!
But, let's not get ahead of ourselves. I still have to take you through the breakfast I've been craving since my parents went up north in May: Blueberry Pancakes. 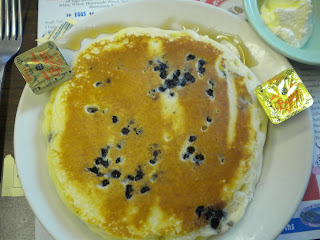 I'm not really a big pancake person. Nine times out of ten I'd prefer waffles. I usually would get an omelette, sometimes even french toast, but almost never pancakes. Something about wild Maine blueberries, though, won me over. IHOP can't hold a candle to Jordan's Restaurant. The name doesn't really do it justice, but this quaint little diner delivers. Not literally. 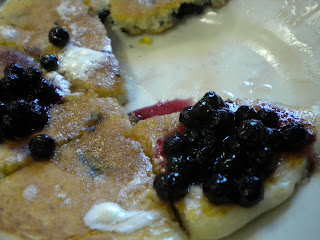 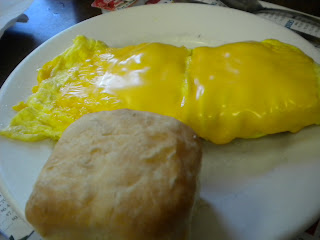 Vanessa got a really tasty looking tasting asparagus and cheese omelet. Dad got poached eggs and a blueberry muffin. The muffin was wonderful. A big hearty breakfast was all we needed before we set off to sea. Now, if you're a sea sick person, I do not suggest eating a hearty breakfast. 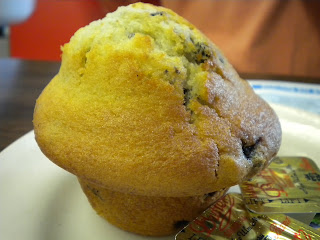 Now, the boat! We saw whales and puffins and seals-- oh my! 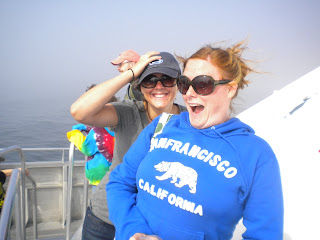 They were so cute. Well, the whales were more gigantic than cute, but I have this tendency to emasculate any animal. The puffins were a no brainer. I mean they are fluffy little birds with bright beaks and squatty bodies. 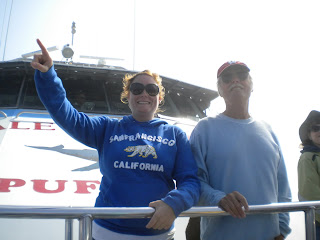 Unfortunately, there are no close ups of any of the animals we saw, but you can squint really hard and see them in the distance. And I have a video clip! Oh-la-la for amatuer video recording. Now, for those of you with light stomachs, skip this sentence or two. The amount of vomit on this boat was unbelieveable. Not ON the boat, but taking place over the side. And, there was a man drinking a beer at 8:30 in the morning. He didn't look too hot a few hours later. 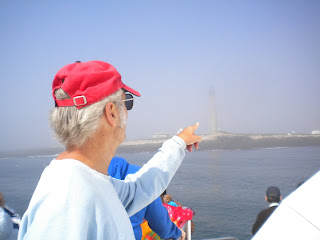 It was hilarious for me to watch my sister squirm at the site of people breathing in and out of paper bags. It was so so cold on the way back to shore that we had to go inside for a little. Not your average summer boat trip, but incredible all the same. 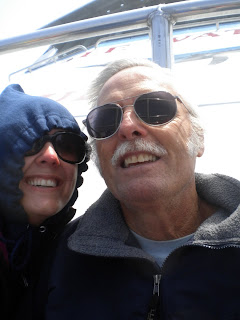 After four hours on the boat, my appetite was revving, and I settled for a gourmet Quiznos for lunch. We headed back to Boston, where I'll tell you about my final day on vacation tomorrow.
Ta-Ta!

I'm loving this. Have always wanted to visit there. The food looks amazing, and I like coconut icecream ;-) Love your writing style too!

I agree...you are making me want to visit this weekend! And I will never get tired of a giant platter of lobster and corn...yum!

LOL baaaahabaaa that cracked me up!
I was in York ME and saw Lobster for sale at only $4.49 a lb. I did not stop because I am stupid LOL

I really enjoyed this post! I love how you documented everything in between photos. It was like a mini blog movie. Sounds like a fun and tasty trip!

omg this is so funny -- i read the pronunciation out loud and my cousin goes "you mean bar harbor?" hahahah.....she's from mass!

What fun...these photos are great:)

My name is Jocelyn and I am with Dwellable. I am looking for fun and authentic blogs about Bar Harbor (or Baahabba) and yours happened to catch my eye. If you’re open to it, shoot me an e-mail at jocelyn(at)dwellable(dot)com.

Hope to hear from you soon!
- Jocelyn