Finally finished my necessary homework so I can update you.

Alright, I have three more days to get all of you through. Three more glorious days of being a hungry energetic tourist. I already told you about my wonderful first night in downtown Boston at some of the big name places and my second day wandering around Harvard Square (which I love).


Thursday morning started with a long run to meet another one of my good friend’s, Alyssa. Lyssie-Poo is a PROFESSIONAL SOCCER PLAYER!!! And, she happens to be one of my favorite people and definteily the best goalie I’ve ever played with. That’s a whole other story though. Anyway, I met her right by the Harvard Stadium for breakfast at Bruegger’s Bagels. Old reliable right? After breakfast I got to see yet another Penn Stater, Tiff, also on the Boston Breakers. Aren’t my friends cool? And famous? And way more impressive than I am? HI GUYS!!! I hope they read this. Lovely to see you both.


They had big girl soccer practice so I headed back home to pack up and head up to Maine, glorious beautiful Maine. Bye-bye big city, hello outdoors! I’m not a nature girl by nature, (unnecessary pun) but I happen to have grown into it. I do love the big city, but over time, I’ve learned to love big trees, blue waters and open spaces. 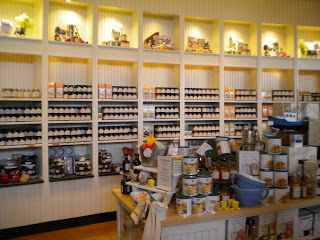 The drive took forever. My dad likes to putz around saying “it’s not the destination, it’s the journey,” so I’ve seen a lot of New England gems that are tucked away between the major must-sees. However, there was a must-see just between Kittery and York. Stonewall Kitchen. Oh-Ma-Gah.Have you been? You should drive to Maine just to go. This is foodie heaven. 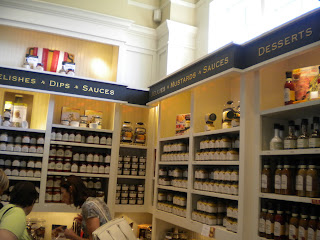 It’s a high end kitchen store with gadgets and utensils, jams, jellys, salsas, and sauces. It is wall-to-wall food. Chocolate sauces galore. Salsas by the dozens. In fact, they gave away free recipe cards and I took at least 20, including a frozen snickers torte, cioppino and banana crepes. 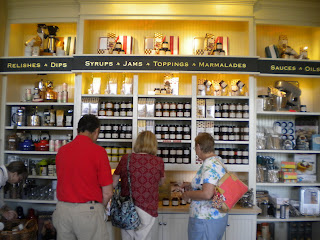 Oh, want to know the best part? Free samples. And no knock to Costco, but these free samples are gourmet. Aren't I such a snob? Although my dad and sister were probably as thrilled as I was, I knew enough was enough and it was time to go. We continued our “putzing” to Booth Bay, Maine, one of the most picturesque places I've been. 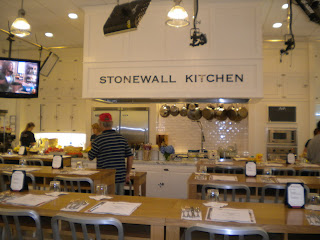 Think fishermen, boaters, and art galleries. Oh, and lobstah. Ever since I was a little girl, we've gone to the Lobsterman's Co-op, but the name was changed and we’re purists, so we skipped it. I used to always order hotdogs and cokes there. I’ve really grown, huh? 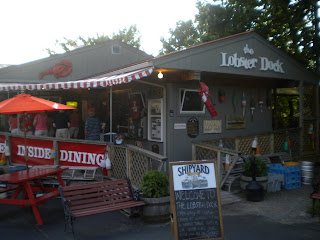 Instead, we chose the Lobster Dock, an adorable little shack on the water. 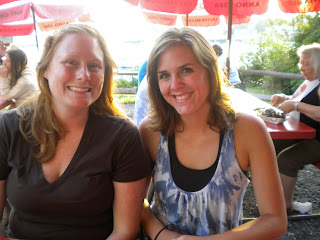 The sun was setting as we sat down for a good old fashion seafood dinner, complete with lobster, clam and a great mix of other things. 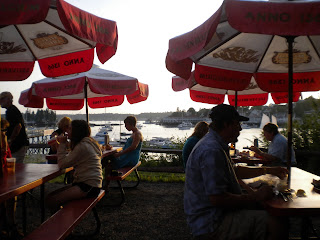 I’m not huge on fried food, so I got the lobster dinner complete with corn on the cob and a buttered biscuit. They lied about the biscuit; it was not buttered. Still good. 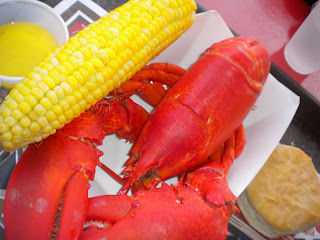 Dad got the seafood combo. Hello nutritious! Fried clam, scallop, shrimp and haddock with coleslaw and coronary heart disease on the side. So good. I definitely gobbled up my share. 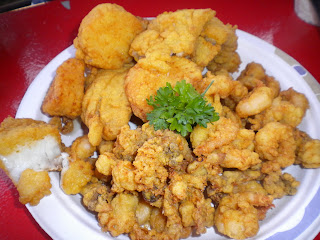 Vanessa got fried clams. Pretty self explanatory. Like I said, I don’t tend to get fried food, but after eating this, it’s not like the post McDonald’s “I shouldn’t have done this” feeling. It’s a splurge, yes, but I definitely was not counting calories. And good thing, because one of my favorite ice cream shops is downtown. 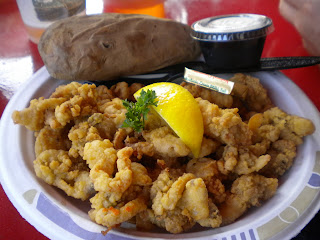 Yes, I’m not kidding. The Ice Cream Factory. We wandered the quaint little downtown, ice creams in hand, sweet goodness dripping down the side. 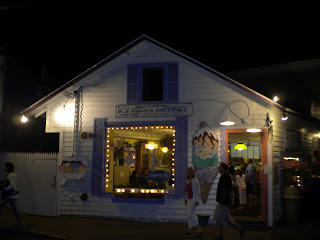 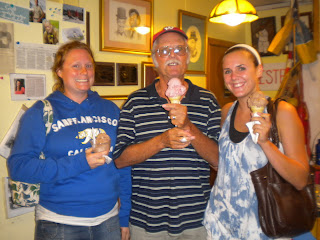 This ice cream kicks my Edy’s Slow Churns behind. How I miss it. The night ended and we headed back to the room, where I slept like a baby in the kid sized bed. I’m not kid sized, but whatever. 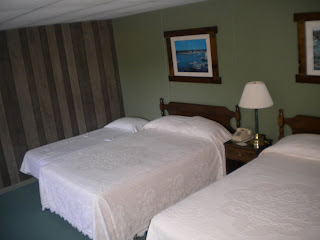 The next morning started early, 6:00 am to be exact. After much debate, we went to a Vietnamese bakery for breakfast, Baker's Way. I craved regularity so I went for a bagel with peanut butter and a lot of coffee. 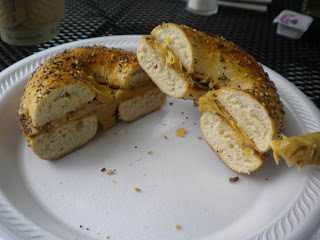 The other sammies looked pretty darn good though.  Dad got the BLT and Vanessa got sausage egg and cheese. 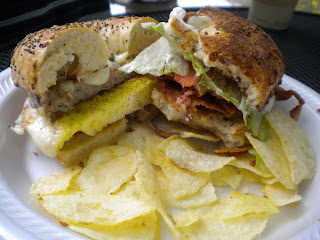 I can’t explain how much coffee I had on this trip. After talking to the server who was confusing our home town of DC with Seattle, Washington, we headed back to the hotel for the next stop on our trip—Bar Harbor. That’s coming tomorrow.
Booth Bay is a great little Maine town. I wouldn’t ever want to live there, but the winding roads along the peaceful water are straight out of a painting. Twinkling lights on charming tugboats and the faint murmur of downtown diners.
It's a lovely town. It's worth visiting, too. You'll get some small town flair, some awesome food, and a quiet night with some beautiful scenes. More tomorrow!
Posted by Jessie -- The Messie Kitchen at Monday, July 19, 2010

omg you went to brueggers??!? that brings tears to my eyes..

not the same without you :(

Oh wow, my sister used to live in Boothbay Harbor, and I just vacationed there a couple of weeks ago! She lives in Bangor now (an opportunity to stalk Stephen King!) but her mother in law still lives in Boothbay Harbor, so we spent 2 days in Bangor, and 4 in Boothbay, and had a fabulous time. I recognize that ice cream shop! And we ate at several places whose names I can't remember. Being a Texas gal, lobster rolls were completely new to me, but I loved them! And I totally agree that the town is right out of a painting. Walking up and down the hills of winding roads was a work out I'll never forget! We snapped hundreds of pictures and just had a wonderful time in a strange but fabulous new place. I can't wait to go back!!

Hope you're continuing to have fun with your family! :D

This looks like an amazing trip! I love going to specialty food/cooking stores, and I love lobster, so I would have been one happy camper!

WOOT for a New England trip!! I have lived in NH my entire life;love the food entires you shared!

Oh how I miss New England (I used to live in Rhode Island)! All the food you shared looks amazing- I could totally go for some good fried seafood. This makes me want to check out Maine..

I'm stunned. I've eaten at the Lobster Dock...the exact same thing you did.

If you're still up there, try to find a winery and get a bottle of blueberry wine. It's amazing.

This looks like so much fun! The Lobster Dock looks so good! Gotta love a little fried goodness every once in a while!!

Lobster AND stonewall kitchen! That is my type of trip. I'm jealous.

sounds like your having a great trip with lots of good food....and isn't stonewall kitchen cool!

You got yourself some New England there.

I have lived here all my life and look different aspects of all the states. I have lived in CT, MA, and now NH and have a place in VT. We vacation in York, ME for the second consectuive year this year. I still can't beleive all the neat places you find when you look around.