I went to New Orleans.

I went to New Orleans the week before Mardi Gras.

I went to New Orleans the weekend the Saints won .

I really went to New Orleans. 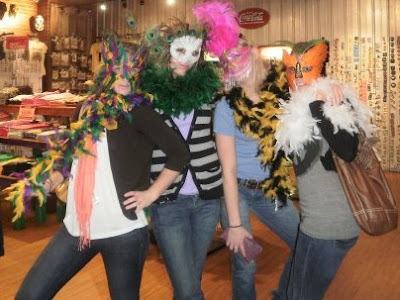 And I loved it! If you've never been to that town, you absolutely must go. Partyers, foodies, and jazz folks alike, it's one of the most eclectic places I've ever been. 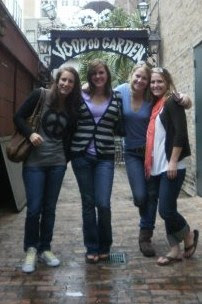 The sidewalks are filled with history, mystery and people. The buildings are beautiful. The jazz music played in the streets hangs in the air, and the chatter of excited newcomers fills the restaurants and bars. It is truly one of a kind. 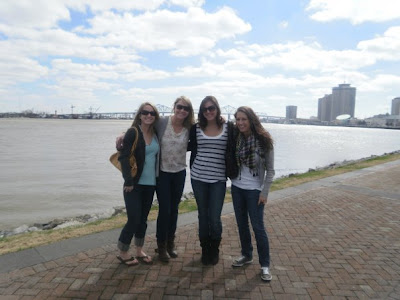 When I was in Nawlins, I went to all the hot spots. I got a beinget at Cafe Du Monde. I sipped a Hurriane from Pat O' Brien's. I had gumbo and jambalaya and pralienes and great coffee. 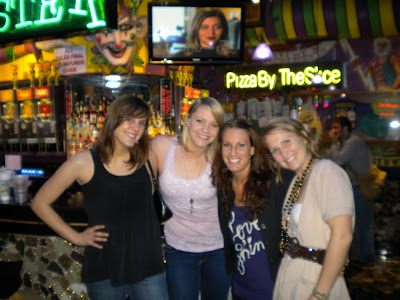 I wish I could go back. Yes, during the trip I was exhausted, hungry, off my regular control freak schedule, but I also spent five nights in an incredible city with some of my best friends and the most hysterical people alive. Here are some pictures of our fun. 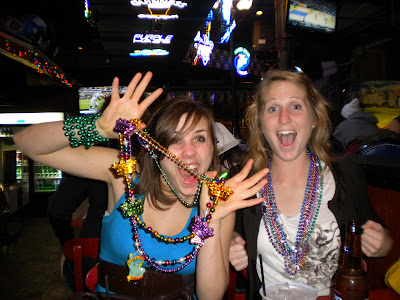 Julia, the tall blonde, is probably my soul mate, or business partnet.  I come up with the jokes, she delivers them. She makes me laugh more than anyone ever, I think. Now, for some reason, when she and I get an idea, it takes off. I won't even go into our TupperCleats campaign, but one day that will make us millionaires.

This has a point, I promise. 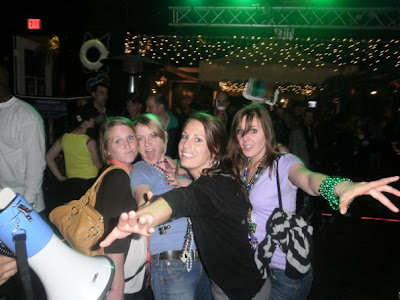 One day, after a particularly long afternoon of cemetary touring, hurricane sipping and bead stealing, we finally ate lunch at a recommended hole in the wall off the beaten path. Maybe that was our first mistake. We all ordered typical Nawlins cuisine. I can't remember specifics but I know that I got jambalaya. 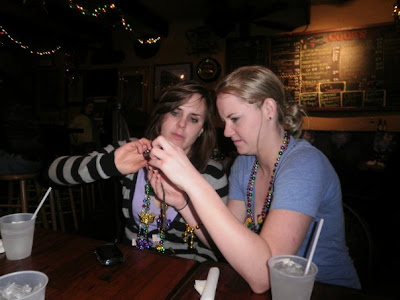 Spicy, hearty and filling, I could barely eat half. I didn't want to throw it away. Julia (or Amy) ordered the sausage sandwich and it was the same deal. We had an excess of leftover food, and we definitely weren't going to bring the leftovers onto Bourbon Street, please! 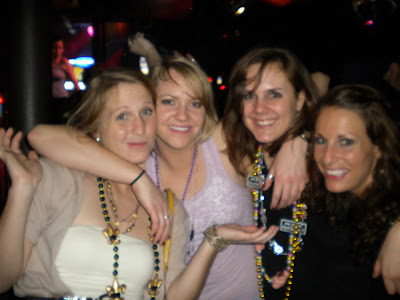 Julia and I, in our philanthropic mindset, thought it would be a good idea to make a jambalaya sandwich. We called it "Juse Jambalaya" because that's what our names are combined. No, we aren't 15 years old, we're mature aspiring chefs with creative minds. 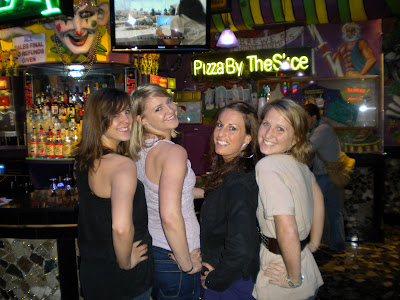 We made up a song too. I won't do you the pleasure of giving you the lyrics in case we ever sell it to Beyonce for some big bucks. 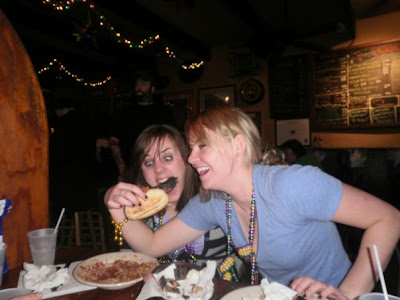 We frolicked down the streets after dinner, Juse Jambalaya in hand, and sang our song. We found a man, who was either homeless or an aspiring artist (I think artist), who was hungry. He told us this. We told him if he sang our song, we would give him the sandwich. Guess what? 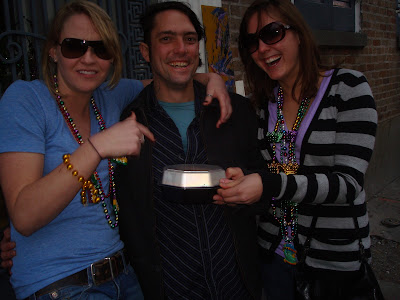 He sang it! And so he was awarded with the first ever Juse Jambalaya Sandwich. It was a moment in history.

Now whenever I make jambalaya, I think of those times. Brings a smile to my face every time. And all joking aside, I make a mean jambalaya. Check out the recipe, and maybe you'll hear the faint jazz music too.


What ya do:
Heat the olive oil in a large saucepan over medium-high heat, until it shimmers. Add the sausage or andouille and cook, stirring occasionally, for about 7 minutes, until it starts to brown. 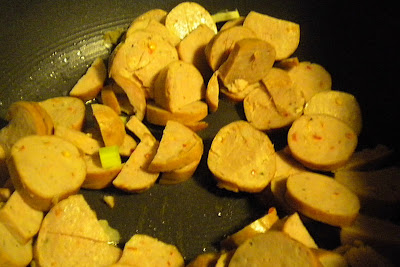 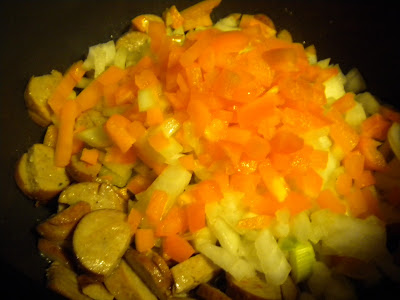 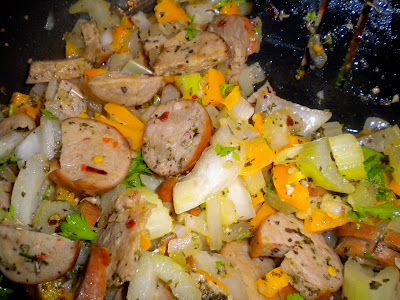 Add the tomatoes and their juices, then add the chicken broth. 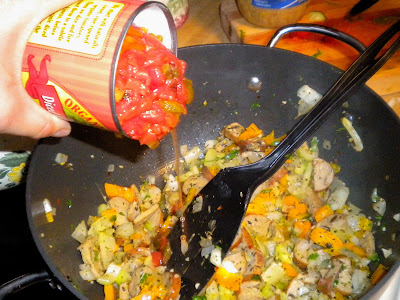 Bring to a boil (increase the heat if necessary), then reduce the heat to medium-low, cover and cook for 10 minutes, stirring once or twice. 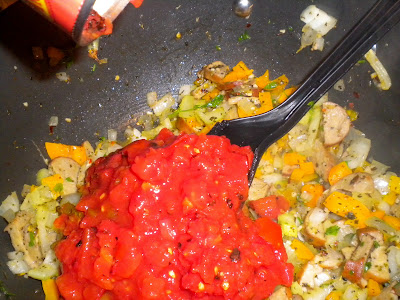 Add the cooked brown rice, then cover and cook for 10 minutes. 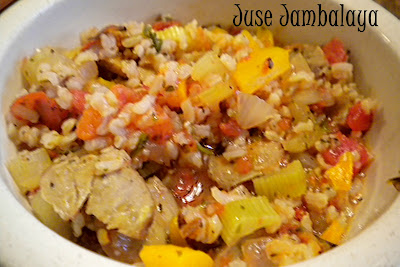 Season with salt and pepper to taste. Discard the bay leaf and divide the jambalaya among individual shallow bowls. Garnish with the scallions and serve hot. mmm looks delicious! the trip also looked like a blast!

This looks awesome! Looks like you had a really, really good time in New Orleans as well.

Hysterical! I seriously think we could be friends in real life. I wouldn't even need to be bribed with this sandwich...though it looks super delicious!

Daggers I'm going to have juse jambalya in my head all day! juse jambalayaaa... zaza Fran!!!!!

Looks like you guys had a blast and some excellent food.