Titanic. C’mon. Oh God, are you too young you haven’t seen Titanic? Leo was a fox!

It’s been 5 years. And to be honest, at that point, the blog felt more like a chore and less like a hobby. So I stopped. It’s not to say I stopped cooking, but I stopped putting everyone on pause at the dinner table so I could snap some photos in the best light. So I took a breather.

But now: we’re in quarantine. And have been for two months. And slowly but surely, time emerged for old hobbies and old habits. So, The Messie Kitchen is back.

And if that doesn’t deserve a drink, I don’t know what does. 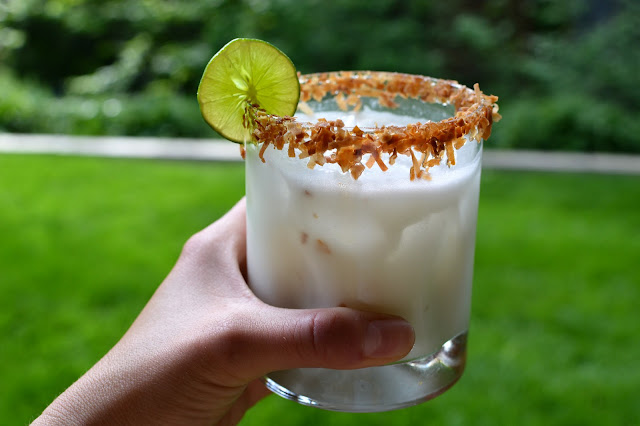 1. If you're toasting the coconut, preheat oven to 350 degrees (F). Arrange coconut flakes in a single layer on a baking sheet. Place in the oven until lightly toasted, 8-10 minutes. Remove each two minutes to stir and check that they are not burning. Remove immediately once toasted and put onto a paper towel to cool.
2. Add tequila, cream of coconut, lime juice, and ice to a blender. Blend until smooth.
3. If using toasted coconut, dip glass in honey and then dip into layer of shredded coconut.
4. Garnish with a lime and serve margaritas over ice. Enjoy!
Posted by Jessie -- The Messie Kitchen at Sunday, May 17, 2020