Finally back to school. This week seemed to be the longest ever. It was so nice to finally be done and heading up to PSU. Penn State in the fall is probably the best thing ever. If you've never been, I strongly suggest you try it. Driving up solo isn't even bad because it's so pretty up here. (Yes, I'm still here. Lonnggg weekend.)

To prepare for my weekend of laziness I decided to get one last run in on Friday morning. Something about sitting in a car all day without doing something active is just not appealing to me. I think I ran about 4.5 miles... something like that. It's the same loop I've done so many times, but I'm not totally sick of it yet. Again, I ran without headphones, and again, it was a lot better of an experience. I might be onto something. Something weird about this particular run is that the last half mile or so scares me to death. Last year...December 30th to be exact, my dad got hit by a car when he was on a walk. He was crossing the street (Guinea for you Northern Virginians) and halfway through, a car neglected to stop at the crosswalk. Thank God he has lighting speed and superior athleticism (ok, Dick is 65...) because he was able to escape a much darker fate and only break nine ribs etc. etc. Anyway, I cross this point almost every time I run and it never fails, my heart races. So far, so good, but one can never be too careful.

After my run, I rushed around trying to shower, pack a lunch, and eat breakfast. I was in such a hurry to get up here and wasn't trying to take my time. For breakfast, I made a breakfast burrito. Salsa today, sick of ketchup. It was mighty fine, and I had strawberries to kill them off before they went bad. 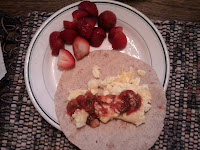 All I really wanted was my coffee, so I sped off to Caribou Coffee. Last time I went there, my car got backed into. Full of good stories this post, huh? But, my luck was better this time, and I actually got a nice little upgrade because someone mis ordered, so instead of a small, I got a medium (minus the 30 cent price difference, hollllerrrr). I finally hit the open road. Caffeinated, and jamming to Sugarland. Life can be sweet. 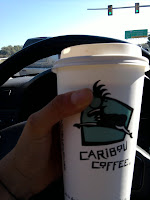 Halfway in, my hunger baby came back and although I tried to wait to eat lunch with girls at school, I knew I wouldn't make it, so I packed my own lunch. I made another pita with sliced chicken, avocado, sour cream with taco seasoning, and lettuce. It was a nice little concoction. Apples and almonds on the side. Yum. 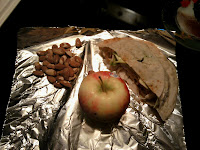 I finally got to PSU, only to tell my lunch dates I had already eaten, ooopsies. Still, it was fun to be filled in on everything I had been missing. I miss it here so much. They had a game, but the weather was awful, and I was being nurse Jessie over at the mustard mansion. Alex and I had a lovely date at Redifer Dining Commons. Let me tell you, their paninis are legitimate. So good. I also had some fries, and tried Alex's chicken cheese steak made mistakenly without onions. Whoops, again. That was my fault. He, on the other hand, had two chicken cheese steaks and fries. Dinner of a champion. 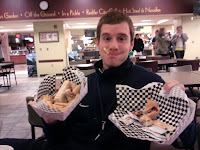 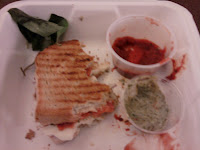 Of course, we had treats later. Brownies that I made (and were average) and Ben and Jerry's. Ahhh... such bliss. I'm a sucker for sweets, have you learned that yet? It's so good to be back...