I'm going to try to get this post halfway done before I go out tonight. We're going to Austin Grill (tex-mex) for mama's birthday. I'm so excited... I love their fajitas. It's inevitable I am going to get a stomach ache because I already sort-of have one from making brownies...and eating some batter... and then I actually ruined them! I either baked them too long, at too high of a temp, or added too much oil. I never make baking errors! It was so sad, but I got to eat the gooey center that wasn't completely ruined.. thus, the stomach ache. Amie and Kristen, if you're reading this, these brownies would have been beaten down completely by the ones we made a few weeks ago... to die for. I'm such a chocoholic. It's absurd. Anyway...

Work on Thursdays is 5:00 a.m. So early, but by 2:00 I'm done for the day and it's weekend! Which is lovely. I'm going to PSU this weekend because Alex is really injured and I gotta go be a supportive girlfriend. Right...? So I'm packing up and leaving in the morning and hopefully I'll be able to blog there too. For breakfast this morning, I had oatmeal with almonds and an apple. 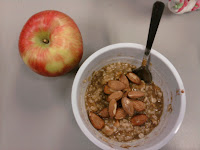 Usually I just have oatmeal and fruit, or maybe a yogurt, but a few hours later, I'm starving. Naturally, it's because oatmeal is so low fat, so it doesn't keep you satisfied. I tried adding flax seeds one morning but it didn't really help enough, plus it wasn't a home run in the taste department. I just threw almonds in once it was cooked and I wasn't hungry until about 10:00.... I eat at 5:00 so it's a success. Most of the morning I spend planning my J&P class, but you know at 7:00, it's time for my moment of happiness. I got my starbucks with cinnamon on top... it was just delightful. 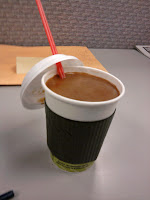 After this, I only have a few hours to my class. I didn't like it today. We went outside and it's much harder to control the class, and "own" it, if you will. People straggle in and getting everyone from one place to the next is a drag. Plus, I have no music, so I can't find my beat. We started with a big lap around the complex and then did some dynamic stretching. Next, I tried to do resistant band side steps but I had so many complaints about it rubbing their ankles so I thought screw this and just made them do lunges, lunges, more lunges etc. I also had them do a few suicides, about 10 yards, back, 20 yards, back. Then we went to the stairs and alternated foot on every step and skipping a step. Then we did more resistance work and calf raises and moved back up for upper body resistance work. We did bicep curls, triceps, lateral raises and squats, packed up our stuff, and moved inside for weights. Usually I do dumbbells but I felt like using barbells for weights today. We did 1 minute intervals of bicep curls, chest press, triceps curls, dead lifts, squats, lunges and then ended with some stretching and core. Once we were inside, things came back to me and I did better, but I really felt like the beginning of class was not successful.

Following my class, I did the elliptical for 40 minutes and got the heck out of the gym. I went to Wegmans (third time in two days) and got pitas, chicken, brownie mix and some yogurt. For lunch I made a really good stuffed pita with sliced chicken, avocado, muenster cheese, lettuce and a tiny itty bit of blue cheese dressing. I grilled it on the foreman and it was superb. I love the pita... I think it's called Kontos smart carb. I probably should have gotten a whole wheat version but I wasn't too concerned. It was just an impulse buy. I also had a FUZE drink... gogi and mixed berries. It was good but really tart. I liked it, but I'm not sure if I will buy it again. The rest of lunch was good though, so I can't complain. 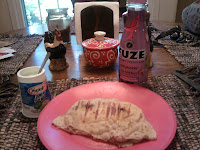 I then set out BACK to the grocery store because, of course I forgot eggs. And when I finally made these brownies, like I said, they came out horribly. So this was a bust in every sense of the word. You know the best solution? Baskin Robbins. She loves the pralines and cream pie, and that is what she shall get. I do have another brownie mix, so that's a possibility too.... Anyway, my snack was brownie batter out of the bowl and some of the trail mix combo I made earlier in the week. Now I'm just waiting for dinner.... and here is the birthday girl; it's time to go!! 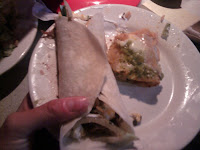 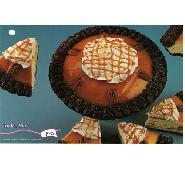 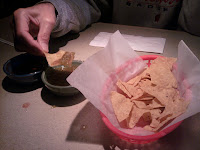 Anddd I'm back from dinner... Holy FULL. So good though. I had my share of chips and we got nachos, carnitas fajitas and enchiladas. So delicious. I'm so full. My pictures are horrible but I'll add them anyway. We went with turtle pie from Baskin Robbins and I only had a tiny slice because I cannot stand nuts in dessert. It was still tasty though. I have a really bad headache, I think from sugar. That's not good. I'm going to bed.... So. Full. Wow.
Posted by Jessie at Thursday, October 08, 2009