The weird thing about Penn State is that 7:00 a.m. on a Saturday=drunken debauchery. I finally think I get to sleep in and BAM, tailgaters pass by the windows yelling about kegs. So, I was up a little earlier than I would have liked but it is what it is. No big deal. I had to get up a little early anyway, because I had to be at the game. Penn State Women's Soccer has such a LEGACY of being Big Ten Champs. 11 years strong. It's one of, if not the longest streak of any team in the NCAA. Pretty sweet to be a part of. Once a year, all the teams who won the championship get honored at a football game during half time. Boys don't eat like girls. There was little to eat, so it was mini wheats for breakfast. Mini wheats and percocet (for him, not me)! Alex drinks whole milk... I think it's foul. Hoorah for his roommates drinking 2%. Wow, I sound like such a prima donna. So that was breakfast. 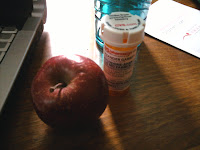 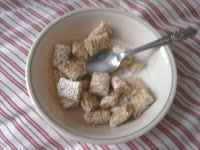 On a side note, It's really awesome to be on the field, even though I can honestly admit I don't care that much about football. It was so good to see all of my former teammates. Nothing has changed. That's comforting. Midway into the experience I was starving. Literally hunger pangs. 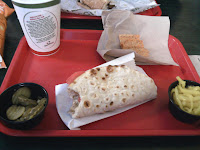 Lunch was quiznos... it's been a while since I went there but I got the cantina chicken sammy and split chips wit Alex. The sammy had chicken, tomatoes, mushrooms, onions, and honey Bourbon mustard. Twas delightful. But really, I just wanted coffee... I converted Alex to a coffee drinker and I'm so excited he's up for it as much as I am. We sat outside Starbucks for about an hour just watching drunk kids from the football game stumbling and cheerleaders still sporting their uniforms. 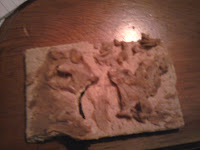 Got hungry... made my go-to of graham crackers and peanut butter. Alex loves chunky so that's what I had but I definitely prefer smooth... most of the time. Sorry this post is so short by the way... I've been swamped.

Later, we had to change Alex's ace bandage and put him back into the brace... An hour and a half later, around 9:15 p.m. pizza and couch sounded like a perfect harmony so we retired early and did a whole lotta nothin. Pineapple pizza... obviously. 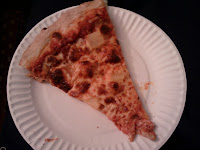 Pretty sure I gorged on my brownies and Ben and Jerry's Half Baked. Pretty sure I forgot the picture. Not on purpose of course....
Posted by Jessie at Saturday, October 10, 2009