Another morning of no school and work. Hallelujah. Someone was looking out for me, because I probably couldn't have made it through this week!! I woke up leisurely and because it was so chilly outside, I knew the only thing I wanted was oatmeal. I combined one last regular Apple Cinnamon with a Lower Sugar Apple Cinnamon packet. I added about a teaspoon of brown sugar too.

I really wanted to work out, but all gyms were closed today. So, I tried to jog in place in my basement. My knee still kills! So, scratch that. Another day off. Grr. I can't even leave the house because my parents took the car. I could go for a walk but I have a ton of school work which will take precedence. 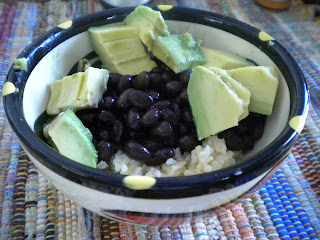 Lunch was yummy. I'm trying to cut back on meat. I know I'm having chicken for dinner so I'm attempting to avoid a ham or turkey sandwich and instead have a vegetarian lunch. Come to think of it, I had a vegan lunch... weird. I made a dish of brown rice, black beans and avocado. This is a good combination of protein, fiber and healthy fat. This did the trick and although I added a little salt, I don't think this meal broke the bank. 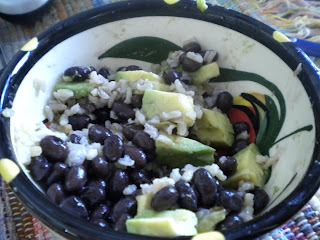 My snack was a banana and peanut butter. Typical. Easy. Fantastic.

Dinner tonight was Chicken Piccata. The recipe is supposed to be from Maggiano's, where I've never eaten but I've heard rave reviews. Here's the recipe 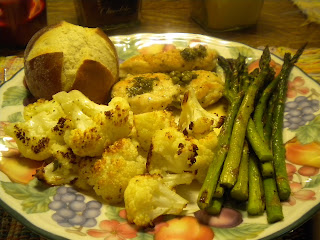 Coat a saute pan with olive oil and heat over medium high. Season the chicken with salt and pepper and a little flour on both sides. Add to the pan and saute until browned well and cooked through. Remove chicken and put it on a serving plate. Deglaze the pan with 2 oz dry wine (about 1/4 cup...deglazing picks up any bits and pieces from the bottom of the pan). Add the chicken broth, capers, parsley, lemons, and butter. Return the chicken to the pan and cook into the sauce. Then, remove the chicken again and bring the sauce to a simmer and add salt/pepper to taste. Pour sauce over chicken and serve immediately! 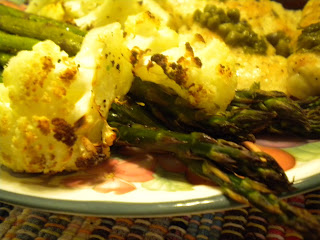 We also are roasting cauliflower & asparagus (separately). Here is what I do for this:

Preheat oven to 450 degrees. Arrange the cauliflower on a baking sheet in a single layer. Drizzle oil, and season with salt and pepper. Roast 25-30 minutes, until lightly browned and softened.

Add asparagus with about 10-15 minutes left on the timer!

I could eat this plain, let alone alongside the rest of dinner!!! The rolls were from Wegmans... I think they're pretzel rolls.

I had two Hershey's Bliss Dark Chocolate squares after dinner... thought this was a pretty good compromise between no sweets and complete dessert-heaven. Tomorrow begins the three day workshop til personal trainer certification, so I'm hittin the hay! Goodnight!
Posted by Jessie at Thursday, February 11, 2010