So, at the fitness center, we've been having a debate: Do "fluffernutters"/peanut butter and fluff sandwiches exist? Yes. Clearly they do, and I am indeed a huge fan. Melinda, a woman who works out, was the one who brought this argument into existence. She too enjoys a fluffernutter sandwich from time to time. My boss, Chuck, and a few others have never heard of them let alone taste one, so Melinda and I were determined to show them the truth, so she brought in the ingredients and I made one for Chuck. 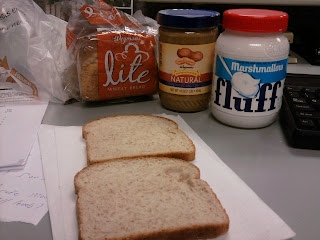 We came to the conclusion it's a northern thing. I had never had one until I went to Penn State, and she has lived in Pa and Jersey before so we're going to bring this delicacy to the dirty south we call northern Virginia. 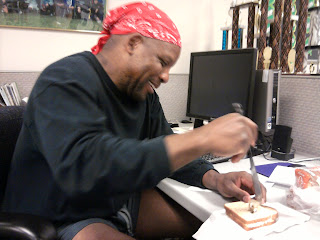 This is Chuck carving out the middle because he won't eat food that's been touched unless he is home. Don't be mad I told the world, boss! 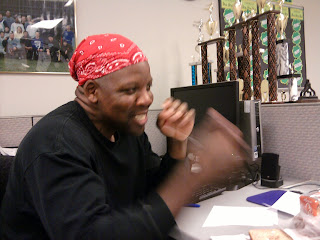 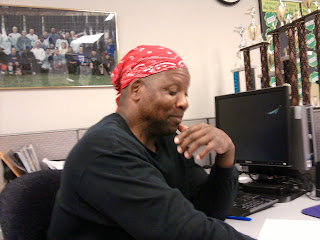 Not too pleased. "Honey would be better." Yes, touche, but sometimes nothing hits the spot better. 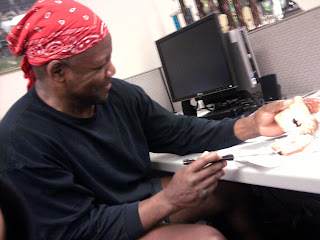 Fair enough. You tried it. Now he's like "what is in this?!?" I'm thoroughly amused if you cannot tell. 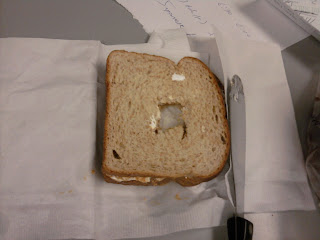 The remains. RIP to a completely fine sandwich, tossed into the wind, and easily forgotten.

Ever have fluff with just jelly? It is amazing.

awful piece of information, I had come to know about your blog from my friend vimal, mumbai,i have read atleast 3 posts of yours by now, and let me tell you, your blog gives the best and the most interesting information. This is just the kind of information that i had been looking for, i'm already your rss reader now and i would regularly watch out for the new posts, once again hats off to you! Thanks a million once again, Regards, cornish hen recipe