What a long little Tuesday. Tuesday has the potential to be such a nice day because I don't have work, school or anything. Today however, was not a nice little Tuesday. It began with the gym, where I went an hour early-- oops. I like to go at 10:00 so I can watch 19 Kids and Counting on TLC (my "non-college-jock" work out is very much low key). Well, turns out I was in time to watch A Baby Story. Who cares about babies? Not me.
Then, I went to Barnes and Nobles for coffee and cookbook browsing and a woman working there told me "you're not really sitting in a good spot...this is a high area." Umm, false! There was little to no . I moved reluctantly.
Then, I went to physical therapy, where I got needles stuck into my ankle so it will work normally again-- ouch!
Then, I went to my high school girl's first game in regionals and they lost, so their season is over.
Then, something else, but that's not worth writing.
So, my Tuesday hasn't been FABULOUS, but you know what makes it better? Good food. So, that's what I was determined to create. The plan? Portobella burgers and finally use the brownie mix I won in a giveaway. Chocolate makes everything better, really. Now, I must say, a few years ago if you were to tell me I was going to eat a mushroom between two pieces of bread and call it a burger, I'd probably smack you in the face...ewww mushrooms.
Now, let the records show I LOVE THEM. There, I said it. And feta. And grilled peppers and squash. So, haters, stand by, you might change your mind. Portobella mushrooms are juicy and almost meaty. They're easy to marinate and a nice change to your average burger. So, here we go.
What ya need:
4 fresh portobello shrooms
2 bell peppers (red or yellow)
2 yellow squashes, ends trimmed off
1 large ripe tomato
1/2 cup olive oil
1 tbsp fresh chopped rosemary
2 tbsp diced onion
1/2 tsp salt
1/4 tsp fresh ground pepper
3 tbsp balsamic vinegar
8 oz feta cheese (or goat, but I hate goat cheese)
12-16 basil leaves
What ya do:
First, remove the stems from the shrooms. 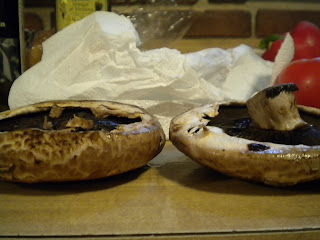 Cut the peppers in half lengthwise. 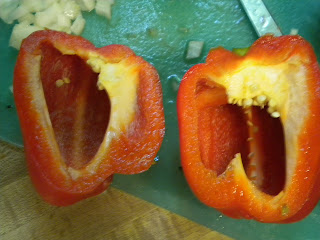 Remove the seeds and flatten the peppers with your hard. 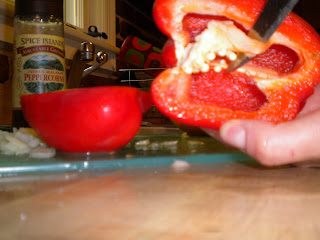 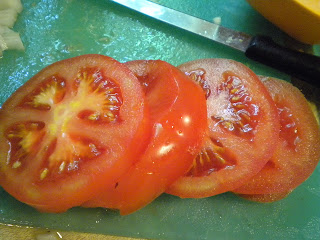 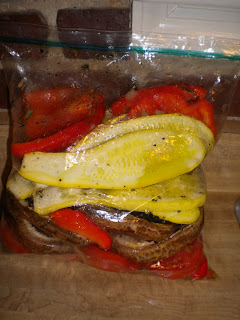 Look, fresh rosemary! With the dirt and everything! 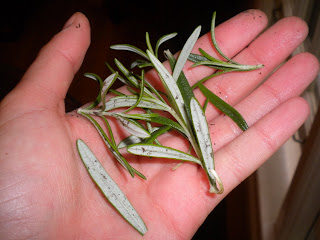 In a small bowl, whisk together olive oil, rosemary, onion, salt and pepper. Add this to the vegetables and allow to marinate at room temp at least 10-15 minutes. 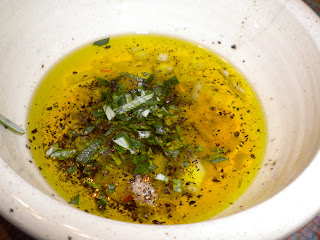 Remove veggies and grilled until tender. Transfer to a large platter and drizzle with the balsamic. Season with salt and pepper. 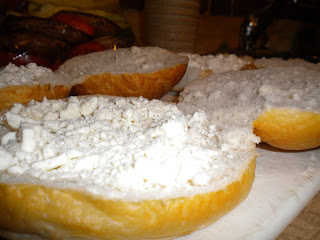 Spread the cheese evenly among one side of each bun. 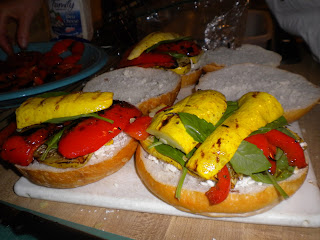 Build the sammies with grilled veggies and basil leaves. Put the remaining side of the bun on top and try not to make too much of a mess! 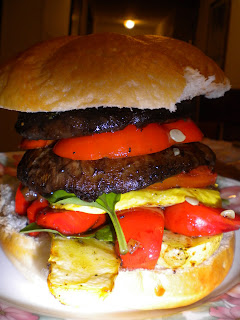 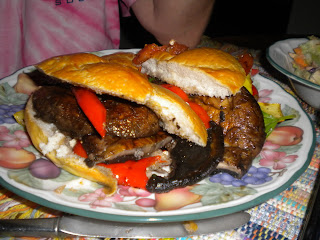 And then it 'sploded everywhere. Stilll yummy.
Then, like I said, I needed emotional eating. So I made the brownies. They were sooo yummy. And as mentioned in an earlier post, a good cause! Check and check. I need to leave the kitchen though, because they smell divine and I need to stop. Hopefully your Tuesday brought you more joy than mine, but all things considered, I guess I'm doing alright. Ta ta.
Posted by Jessie -- The Messie Kitchen at Tuesday, May 25, 2010

I just started eating mushrooms because I always assumed I didn't like them but I LOVE them!!! These burgers look great!

The burgers look wonderful! Hope you'll have a better Wednesday.

This looks so yummy and healthy....

I'm a fan of emotional eating, particularly when it involves brownies ;)

Where are the brownies? I want a picture of them!

mmmm...this looks so yummy and palatable!

This is what I want right now! Looks great:)